The Art of the Move


At long last, we moved. I've been talking about it, planning for it, and then going through the process of culling, donating, tossing, and packing for what seems like eternity, so that the actual move was almost anti-climatic. No time for sentiment when it's 100 degrees, 200% humidity, and the truck is a-waiting. To my old house: See You, it's been great.


To the New One: um, pardon me, but you looked like you were pristine and perfect when I bought you; now that I'm living here, you've got more than your fair share of problems.


I've found in life that often what I fear will be the big problem – isn't; and what I thought would be a snap is a totally unexpected disaster. For example, when our oldest son was in kindergarten, at a private school that was known for its child-centered philosophy and for which we were paying a fortune which we didn't have – we got a full-price offer on our house. At last we could move so that my husband's commute to his new job, close to 2 hours each way, would be eliminated.


I obsessed over moving my firstborn during the school year, convinced that I was about to inflict unfixable psychic damage that would require years of therapy. (What can I say? I'm a writer, I tend to be overly dramatic). But sadly, it's the truth. I was terrified about the short- and long-term effects on child number one.


So of course, I paid zero attention to the two-year old, who was a happy-go-lucky, walked at ten months, toilet-trained himself at 20 months, sprite.

You know the end of the story. Son number one headed off to public school and announced he'd always hated the fancy-schmancy private school. Son number two became a 30-pound permanent weight on my leg, regressed totally, and left me wondering just how dumb I could be to so totally misread the cues about both kids. OY.


For this move, I had no kids to worry about – but I did have a very aged dog who is very particular about her toilet habits. (Why does any move involve me worrying about bathroom habits?). So she spent the first week of the move with her doctor, to avoid the chaos of the move (and the quick trip we took to son number two's graduation from his MFA program – and yes, he did grow up unscathed from that "traumatic" period of his life). We brought Clio home on Monday and spent the next 24 hours walking around our neighborhood trying to entice her to "do her business." She's pickier than Queen Elizabeth about her throne. But finally, she has found a few spots that suit her – and other than that, she's eating, sleeping, and begging for treats like normal. It's quite possible that she prefers this house to the old one for the same reason my husband does – no steps. Both suffer from aging knees.

So I'm moved in and have one zillion boxes, workmen, and house problems to deal with. But I'm also more than ready to move on to some murder and mayhem – fictional of course.


Marian, the Northern, unsettled, but getting there, half of Evelyn David 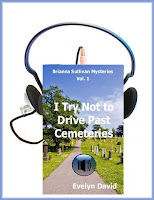 I Try Not to Drive Past Cemeteries, the first book in our Brianna Sullivan Mysteries series, is now available as an audio book at Amazon through Audible.com and at iTunes. 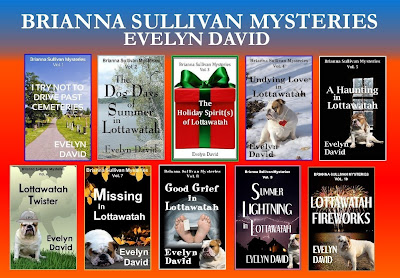