Next Tuesday marks the release of the 8th book in my Southern Sewing Circle Mysteries (and my 17th book overall), REMNANTS OF MURDER. 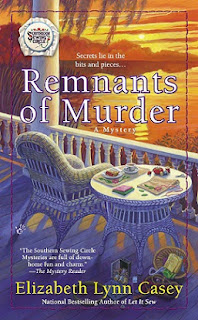 I guess you could say I'm proud of both those numbers. Proud that a series I took a chance on is thriving so well it even has eight books, and proud that I achieved a dream I've had since I was ten years old and have stuck with it through 17 books.

There's not a day that goes by when I don't have a memory flash of myself sitting at my friend's kitchen table, drawing the pictures to go with a little story I'd written about a little bear, named Kidney, who learned a lesson (cleverly titled, Kidney Learns a Lesson). Or the story about the gnome, named O'Casey, who had a wish (that would was called, O'Casey's Wish).

Now, some thirty-five years later, they are (though, in the case of Tuesday's book, they'll be reading my pen name).

And as exciting as each new release still is on some level, I think the part that excites me most these days is the example that it sets for my kids--the example that says if you want it badly enough...and work at it hard enough...you can make things happen.

So yeah, come Tuesday afternoon, I will be having a little celebration. Not sure what it will entail, probably a stop at B & N to see the book on the shelf and eat some sort of chocolaty-treat in the café, but whatever I do, I know I'll be glancing over at my kids and hoping they're taking it all in...
Posted by The Stiletto Gang at 8:00 AM