On The Books by Dru

What is your longest running series you continue to read? I have several and the five listed below are coming out in November. With over 12 books in their respective series, I look forward to my annual visit with these characters. The books range from a cozy, a humorous read to a thriller.

Looking for Yesterday by Marcia Muller, #31 in the Sharon McCone mystery series. 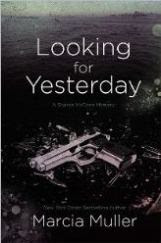 Three years ago, Caro Warrick was acquitted for the murder of her best friend Amelia Bettencourt, but the lingering doubts of everyone around Caro is affecting her life. Sharon McCone is confident that she can succeed where other detectives have failed (though at times it's hard to shake her own misgivings about what happened), but when Caro is brutally beaten right at Sharon's doorstep, the investigation takes on a whole new course. How many more people remain at risk until Amelia's murderer is finally caught?

The Buzzard Table by Margaret Maron, #19 in the Deborah Knott mystery series. 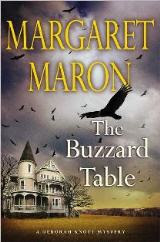 Judge Deborah Knott and Sheriff's Deputy Dwight Bryant are back home in Colleton County with all their family and courthouse regulars. But there are a few new faces as well. Lt. Sigrid Herald and her mother, Anne, a well-known photographer, are down from New York to visit Anne's ailing mother, Mrs. Lattimore. When the group gathers for dinner at Mrs. Lattimore's Victorian home, they meet the enigmatic Martin Crawford, an ornithologist who claims to be researching a new book on Southern vultures. More importantly, he's Mrs. Lattimore's long-lost nephew, and Sigrid and Anne's English cousin. With her health in decline, Mrs. Lattimore wants to make amends with her family--something Deborah can understand as she too is working to strengthen her relationship with her stepson, Cal. But for all his mysterious charm, Anne can't shake the feeling that there is something familiar about Martin...something he doesn't want Anne or anyone else to discover. When a murderer strikes, Deborah, Dwight, and Sigrid will once again work together to solve the crime and uncover long-buried Lattimore family secrets. 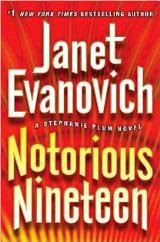 After a slow summer of chasing low-level skips for her cousin Vinnie’s bail bonds agency, Stephanie Plum finally lands an assignment that could put her checkbook back in the black. Geoffrey Cubbin, facing trial for embezzling millions from Trenton’s premier assisted-living facility, has mysteriously vanished from the hospital after an emergency appendectomy. Now it’s on Stephanie to track down the con man. Unfortunately, Cubbin has disappeared without a trace, a witness, or his money-hungry wife. Rumors are stirring that he must have had help with the daring escape . . . or that maybe he never made it out of his room alive. Since the hospital staff’s lips seem to be tighter than the security, and it’s hard for Stephanie to blend in to assisted living, Stephanie’s Grandma Mazur goes in undercover. But when a second felon goes missing from the same hospital, Stephanie is forced into working side by side with Trenton’s hottest cop, Joe Morelli, in order to crack the case.

The real problem is, no Cubbin also means no way to pay the rent. Desperate for money—or maybe just desperate—Stephanie accepts a secondary job guarding her secretive and mouthwatering mentor Ranger from a deadly Special Forces adversary. While Stephanie is notorious for finding trouble, she may have found a little more than she bargained for this time around. Then again—a little food poisoning, some threatening notes, and a bridesmaid’s dress with an excess of taffeta never killed anyone . . . or did they? If Stephanie Plum wants to bring in a paycheck, she’ll have to remember: No guts, no glory. 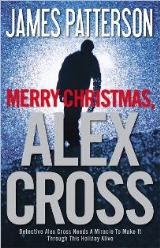 It's Christmas Eve and Detective Alex Cross has been called out to catch someone who's robbing his church's poor box. That mission behind him, Alex returns home to celebrate with Bree, Nana, and his children. The tree decorating is barely underway before his phone rings again--a horrific hostage situation is quickly spiraling out of control. Away from his own family on the most precious of days, Alex calls upon every ounce of his training, creativity, and daring to save another family. Alex risks everything--and he may not make it back alive on this most sacred of family days. Alex Cross is a hero for our time, and never more so than in this story of family, action, and the deepest moral choices.

Nightshade on Elm Street by Kate Collins, #13 in the Flower Shop mystery series. 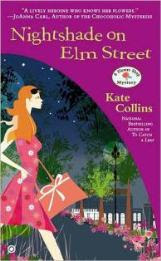 In addition to running her flower shop, planning her wedding, and juggling two mothers who both want to host an elaborate bridal shower, Abby Knight is facing another complication. Her ditzy cousin Jillian asks her and her longtime beau, Marco, a private detective, to find a woman who’s gone missing from the exclusive beach house belonging to Jillian’s in-laws, the Osbornes. The missing woman is also the fiancée of Pryce Osborne, a wet noodle with a big bank account who dumped Abby just before their wedding several years ago. Merely being anywhere near Pryce makes Abby’s insecurities grow like kudzu. Then a woman’s drowned body surfaces, and Pryce becomes a prime suspect in her death. Unless Abby and Marco can get a killer to come clean, their bridal shower will turn into a complete washout...and Pryce will be exchanging a sunny beach for a prison cell.


Have you read any of these series long-running series?

Email ThisBlogThis!Share to TwitterShare to FacebookShare to Pinterest
Labels: On The Book by Dru