Most Fun Book Launch Ever 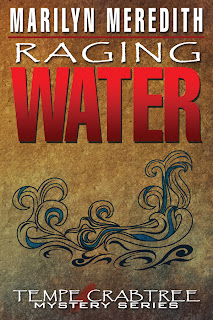 One of my friends who is also a big fan of the Deputy Tempe Crabtree series kept begging to be a character in one of my books. "I don't care if I'm a murderer or if you kill me off, please put me in a Tempe book."

I finally obliged her. I didn't use her name, but I put all the rest of her in--her personality, her looks, her passions, her house,  and her dogs. The character Miqui Sherwood is really my friend. Miqui and her dogs are an important part of the story.

The book was at the publishers and ever so often, my friend would call, "Is the book here yet?"

We planned a  book launch at our local Inn (there's one in the book) that had just reopened. I made postcards for us both to send out and big posters for the Inn to display. I got a piece into the newspaper and promo was on the radio about the launch.

In the meantime her doctors gave her the devastating news that she had a rare form and most difficult type of cancer with a 50/50 chance of cure. She began radiation and chemo treatments. The book came and she began reading a copy. I couldn't help but wonder if she'd be feeling well enough to enjoy the launch.

Her last chemo treatment was the morning of the launch. She arrived soon after I'd set up the parlor of the Inn with my books and a delicious cake decorated like the book cover. I need not have worried, she looked and felt amazingly good.

Most of the people who came were her friends. I talked about her part in the book. She said she was amazed by how much I knew about her. And by the way, she loved the book and her party. She signed the books right along with me.

After the launch was over, a bunch of us stayed at the Inn and had a lovely dinner.

It was great event in many ways, and most of all that my friend had such a good time.

Raging Water Blurb: Deputy Tempe Crabtree’s investigation of the murder of two close friends is complicated when relentless rain turns Bear Creek into a raging river. Homes are inundated and a mud slide blocks the only road out of Bear Creek stranding many—including the murderer.

I know there are some people who like to read a series in order, but let me reassure you that every book is complete. Though the characters grow through each book, the crime is always solved. Here is the order of the books for anyone who wants to know: Deadly Trail, Deadly Omen, Unequally Yoked, Intervention, Wing Beat, Calling the Dead, Judgment Fire, Kindred Spirits, Dispel the Mist, Invisible Path, Bears With Us, Raging Water.

Bio: Marilyn Meredith is the author of over thirty published novels, including the award winning Deputy Tempe Crabtree mystery series, the latest Raging Water from Mundania Press. Writing as F. M. Meredith, her latest Rocky Bluff P.D. crime novel us No Bells, the forth from Oak Tree Press. Marilyn is a member of EPIC, three chapters of Sisters in Crime, Mystery Writers of America, and on the board of the Public Safety Writers of America.
Visit her at http://fictionforyou.com and follow her blog at http://marilymeredith.blogspot.com/

Marilyn borrows a lot from where she lives in the Southern Sierra for the town of Bear Creek and the surrounding area.