As I get older, I find that flashes of the present transport me into the past all the time. And each time it happens, it's like an unexpected gift that almost always leaves me with a smile on my face.

It happened again just last night. My husband and I went to see Fiddler on the Roof at a nearby dinner theater. The first number in the show--Traditions--was an instant flash back to a time when Dear Daughter # 1 (who is closing in on 18) was just ten. She was part of an amazing kids' production of Fiddler during the year I homeschooled her and her sister. 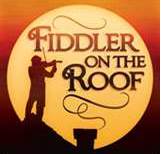 In that production, DD # 1 was a Jewish man--equipped with black vest, black hat, black pants, beard, and wig (to cover her almost white-blonde hair). Suddenly, I was back in the auditorium, watching her instead of the actual cast on the stage in front of me. I saw her arms shoot up every single time theirs did. I saw her dancing to the left and the right. I know I was smiling through the memory, but I also know my eyes were misting, too.

Then, later on in the show, the four male actors start doing the bottle-dance. And, once again, I was back in that auditorium, watching my little girl dancing with a bottle atop her head. I could see the concentration and pride on her face as the audience clapped. I saw the momentary disappointment when, during one of the performances, the bottle slipped off her hat the last time she rose from her knees.

And I loved every single moment of it.

~Laura
Posted by The Stiletto Gang at 7:47 AM