Or
Look, it's My New Short Story!
by
Bethany Maines


I have a theory that short stories are like jokes.  There’s the set-up that establishes location and characters. A man walks into a bar with a duck on his head.  Then there’s the action that moves the plot forward. The bartender says, “Sorry, we don’t serve monkey’s in here.” And the man says, “It’s a duck.”  And then there’s the ending. The bartender says, “I was talking to the duck.”  There’s always more that can be added to the joke, such as why the man had a duck on his head to begin with or who won the fight after the ending, but the joke doesn’t really need it.  And there’s the challenge to the author – to figure out what is the right amount of information and what is just an explanation of the why the man is wearing a duck hat.

Tomorrow, I’ll be releasing my first e-short story, Supporting the Girls, (available from Amazon, ibook, Barnes & Noble, and Vook) so you will be able to judge for yourselves whether or not I selected the correct information. Supporting the Girls is a new adventure for Nikki Lanier and her covert team of Carrie Mae make-up ladies.  (If you haven’t read my novels Bulletproof Mascara and Compact With the Devil, you may need to understand that Carrie Mae is a make-up corporation, specializing in at-home sales and make-up parties, that also happens to run an organization of female operatives that help women everywhere.) 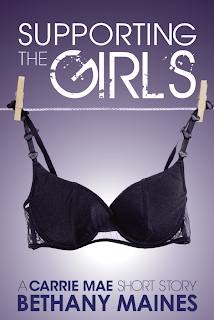 And I may have gotten a little carried away while I was working on my story because I also made a video.  But when you have a “great idea for a movie” (you have to say that part like Jean Claude VanDamme), you know a videographer, and you’re friends with an entire karate school of awesome people, suddenly an action movie doesn’t sound like such a far-fetched venture.  Head over to youtube to check it out!

It’s possible of course that my joke isn’t that good, or that possibly the joke is on me, but tomorrow you will have the opportunity to judge for yourselves and I’m hoping I hear laughter.  But… um… you did read that part about how I’m friend with an entire karate school, right?  Let’s just say, I’d better hear laughter.

Leave a comment to below for a chance to win a free copy of Supportingthe Girls!
Posted by The Stiletto Gang at 4:15 AM