Always Better in the Retelling 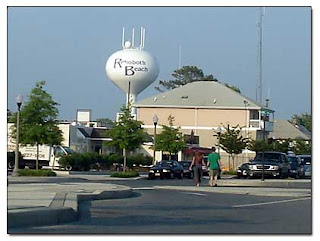 Every summer, when my boys were little, we'd head to , for a week of sun and fun. Back then, Rehoboth was a little less honky-tonk, a little more family friendly than neighboring . But to get to this little isle of paradise meant traveling down the turnpike (designed by the devil himself when the traffic is heavy) and then take Route 13, which at the time was a two-lane road. In other words, travel on a slow-moving parking lot with three kids under ten who have been stuck in the car for hours and it is no one's finest hour. That particular summer, the final two hours stretched to four, and when we arrived at our rental, we were underwhelmed to be sure. We expected ; we got slightly better than a worn-out trailer.


It had three tiny bedrooms, but oddly enough, the living room, kitchen, master bedroom and bath were on one side of the house with two small bedrooms on the other. Running down in between was a screened porch. In answer to why I didn't know this before plunking down a week's rental – the Internet wasn't what it is today and there were no virtual tours. The backyard, which I envisioned as a place for outdoor games post-beach, had been planted with succulents so it was the equivalent of trying to play catch on a field of cacti.


The house was hot, humid, and had a strong mildew odor. But it was two blocks to the beach, so hubby gamely unpacked the car, and we headed off for all that fun in the sun. The late afternoon sky was a little dark, but nothing too ominous, but I should have picked up the hint that all was not well in paradise when the lifeguards blew their whistles and signaled by touching their calves, that no one was to go further out into the ocean than about two feet. Still, the two older boys raced into the water and the little guy, then not quite two, ran to catch up. Hubby sprinted after him just in time to see him knocked down by a wave breaking on the shore. He scooped him up, carried him up to our blankets, and the kid promptly threw up all over us.


We headed back to the house. Using the outdoor shower to remove the ton of sand we had collected in our 15 minutes on the beach, involved walking over the succulents, to a chorus of screams, and rinsing off in ice cold water, accompanied by more screams. Dinner was the usual affair of complaints about the food and I was more than happy when we'd put all three of the kids to bed. I couldn't take much more of this fun. And then the skies opened up.


By opened up, I mean the end of the world, apocalypse kind of storm. Thunder, lightning, hail, driving rain, tornado-like winds – all traveling down that screened-in porch. Within seconds, all three boys were flying into our bedroom and hurling themselves into our bed.


So I did what any logical mother would do. I calmly announced to my husband that I wanted to go home. I'd had it with vacation.


And my husband did what any logical man would do. He calmly announced that he had just driven seven hours in a car filled with mini-terrorists, had paid a small fortune for this place in paradise, and there was no way on earth that he was getting back in the car the next day to repeat the adventure in reverse.


It was not our finest moment.


So we settled down to sleep, all five of us in the bed.


And the next morning dawned early and bright. Hubby and kids headed out the door for the fantastic fresh donuts available scarcely a block away. Later we strolled down to the beach and built sand castles, jumping the mini-waves at the shore's edge as the water was still rough. We had a beach picnic (the crunch in the peanut butter was from sand), flew kites, walked the boardwalk, played arcade games.


And we built a treasure trove of family memories, including the one about the indoor hurricane the first night in Rehoboth.


Vacations are rarely hassle-free. I often felt like I was the social director on a rocky cruise ship trying to make sure we didn't run aground. But when I look back on those days of disasters and triumphs, when I hear my grown kids howl at the recounting of those family vacations, I wouldn't trade one second. Well, maybe the vomiting, but that always elicits such laughs in the retelling, so maybe not even that.