Hi, everyone! This is Linda, and I'm pleased to welcome Kathleen George as a guest to The Stiletto Gang. Kathleen has been writing wonderful, smart police procedurals set in her hometown of Pittsburgh for years. The Odds was nominated for an Edgar. Her new book, Simple, will launch Aug. 21. I think it's her best yet.

Nora the Teacher
by Kathleen George 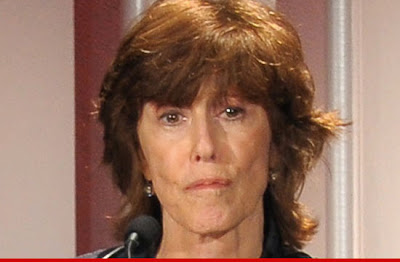 I knew the writer Nora Ephron just a little through my husband who’s been friends with her husband for many years.  The four of us had a few lunches and dinners together.  Most of this social contact was, I believe, before she became ill.  Or before she knew she was.  I found her intimidating and fantastic at the same time.  Once she ordered a diet Coke and the waiter told her soberly that the Coke dispenser in the restaurant (a nice restaurant) was broken.  She gave him a withering gaze.  She said, “There’s a store next door!”  He mumbled and dithered.  She got up from the table and returned minutes later with a huge bottle of diet Coke.  “We’ll need glasses of ice,” she informed him as he got an aha expression on his face.
Her wit never took a holiday.  She was brightly brittle and funny about politics, the movie business, food, everything.  To me, her lines always have the mark of a surprising truth.  “Just the burger, no French fries,” she told a different waiter at a different lunch.  Then she called him back and said levelly, “I’ll have the French fries with my burger.”  She turned to us.  “Is there such a thing as a bad French fry?”
She said at a lunch on another day, as we tried to avoid the thick gorgeous bread on the table—and failed miserably—that if she found she had a month to live, she would eat nothing but bread.  I wonder if she did.  We had lost touch by then but she was protecting her privacy, not talking about her illness.  I hope she had lots of great bread during those last years.
Food was one of her great subjects but so was politics and the news.  After 9/11 she recounted stories about people who said things like, “I was at the dentist and he knew a woman who . . . “ etc.  She was contemptuous about people who tried to make that huge tragic disaster about them.  And she was right; she was a walking cautionary lecture.
I read an interview with her in which she said criticism never stopped her.  She didn’t take the time to let it bother her.  It was always important, she said, to be on the next project, working and not looking back.  And apparently she was working up to the last minute.
In that interview she also said that her image of a good death was to die in her sleep at 83.  She didn’t make it to 83.  She got cheated big time by twelve years and I doubt that she had peaceful sleep at the end.  But once more she was teaching.  By socializing and working up to the end—and not talking about illness and impending death—it seems she gave us that possibility to ponder.  “Nobody knew,” her husband said.  What a big decision that was.
I’m still thinking about Nora’s way.  But I’ve always ended up thinking hard about all her lessons. 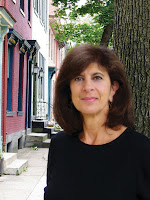 KATHLEEN GEORGE is the author of The Odds, which was nominated in 2010 for the Edgar for Best Novel. Her new novel, Simple (Minotaur Books), will launch on August 21. She is also the editor of the short story collection Pittsburgh Noir. A professor of theatre at the University of Pittsburgh, she and her husband live in Pittsburgh, Pennsylvania.
Posted by The Stiletto Gang at 5:00 AM