Excerpt from Summer Lightning in Lottawatah 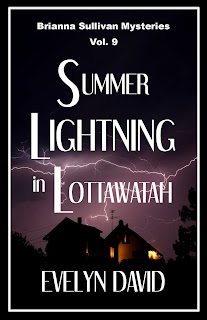 
The apartment door was ajar. "Cooper?"


I was yelling his name, partly because I was afraid, partly to make myself heard over the thunder and the barking dog I clutched in my arms.


I reached inside and flipped the wall switch. Nothing. The power was out.


struggled against me and managed to escape. He disappeared into the blackness of the apartment.


Lightning flashed and for a few seconds I could see the living room.


Cooper was standing in the center of the room, staring down at something on the carpet.


The next flash of lightning revealed it wasn't a something on the floor; it was a someone.


"Cooper? What happened?" I took a few steps into the room, pulling my cell phone out of my pocket. I felt something brush past my leg. "I'm calling 9-1-1. Are you hurt?"


"Be sure to tell them he killed me."


The raspy voice came from beside me and it wasn't Cooper's.


Instead of dialing 9-1-1, I started to call the Lottawatah Police Department directly. Obviously paramedics weren't going to be needed.

***
I didn't finish my 9-1-1 call. Turned out Cooper's landlady had heard the gunshot and called the cops. A couple of seconds after I saw Cooper the room was filled with flashlighted first responders and police officers. It felt like the storm had moved inside the apartment.


Thunder kept booming, the sound waves shaking the apartment building. I was standing just inside, near the open doorway. The rain was blowing in from behind me. Except for where the beams from the moving flashlights fell or when the lightning flashed, the room was pitch black. I kept trying to focus on the location where I'd seen Cooper. He didn't seem to be there anymore. He hadn't said a word since I'd entered the apartment. The whole scene had the quality of a nightmare. I was ready to wake up.


Officers in raincoats circled me as though I wasn't there. I ventured a few steps farther into the room. That was a mistake. I was finally noticed, my invisibility cloak deactivated.


The officer I often jokingly refer to as Barney Fife physically removed me from the scene. He took hold of my arm and pulled. He wouldn't even let me look for before rushing me through the pouring rain to his patrol car. It wouldn't have taken me long to find Leon, the bulldog was probably hiding in the closet, buried under whatever dirty clothes that Cooper had tossed on the floor last. I tried to explain that to Barney Fife. I tried to tell him that I needed to bring with me, but he ignored me. I guess I'm lucky I wasn't put in handcuffs.


To punctuate the surreal quality of the scene, Barney Fife put on flashing lights and a siren for the few deserted blocks to the small town police station. Without a word, he locked me in one of the two sparsely furnished interview rooms. I noticed that the police station had electricity. Apparently the power outage didn't extend to . Maybe the boom I heard wasn't a gunshot, just a blown electrical transformer.


No. That was just wishful thinking. It was a gunshot. I was sure of that. And there was a body on the floor and a ghost talking to me, although the last fact would probably not be admissible in court.


My clothes and hair were soaking wet from the rain. The wooden chairs were just as hard as I remembered from my first visit to the Lottawatah Police Station just after I arrived in town.


I sat there, staring at nothing in particular. My thoughts were jumbled. I didn't know if Cooper had been hurt. Had someone tried to rob the apartment? Had a criminal come after Cooper seeking revenge? Who had been in the apartment?


I pushed my dripping hair out of my face. I noticed my hands smelled like the wet dog I'd recently handled.


"Do you want some coffee?"


Chief Harlan Bell was standing in the doorway. How long had he been there? I hadn't heard him come in. Was I losing my mind? How much time had passed since the shooting? Minutes? Hours? No, not hours.


" is bringing you some dry clothes. Did someone read you your rights?"


"Am I under arrest?" Surely by now Cooper had explained to his boss what had happened. And whatever that was, it must have been self-defense. And besides, why would I be under arrest. I hadn't killed anybody. I didn't even own a gun.


Chief Bell just stared at me. I noticed he had a plastic cover over his Stetson. I didn't realize they made rain covers for cowboy hats.


"Is that a new hat?" It seemed I couldn't process more than one thought at a time. Is this what shock felt like?


I needed something, but it wasn't a lawyer.