What I Learned at my Aunt's Memorial Service

No, this is not going to be morbid. My Aunt Flossie lived to be 100 years, 6 months, and one day old. She had a most productive and mostly wonderful life. Auntie was the sickly one, often had migraines, had some life-threatening illnesses, and there were several times we thought she might die.

She was quite the belle of the ball when she was young and had many suitors. (That's what they called them in that day.) She and my mom drove to UCLA in a jointly-owned Whippet which had lots of flat tires. Both Flossie and my mom learned to drive out of self-preservation. Their mom (my grandma) got her license by writing in for it. She tried to learn to drive unsuccessfully, with her terrified daughters cowering on the floor of the back seat of whatever car she was driving. Flossie didn't give up driving until she was in her mid '90s.

My grandparents sent my Mom and Flossie to Hawaii as a reward for graduation from college. (In those day you went my ship and they roomed with a mother and daughter they didn't know.) My mom was married at the time and had me. My dad and I were left behind to fend for ourselves, I was probably around 4. Years later I learned my mom went along to chaperone and keep my auntie out of trouble. And from stories both told, Auntie did have a great time flirting and dancing with many young men.

She married a handsome policeman, had one daughter, divorced, and later in life, remarried her husband and remained with him until he died.

Flossie became a school teacher, later a music teacher and finally the head of music for the whole school district, K through high school. She made all of her own clothes, most of them in some shade of purple her favorite color.

She was one of the founders of the church she belonged to for over 60 years where she also taught Sunday School, headed Vacation Bible School, played the piano for the Sunday services--and continued to play for Wednesday night service into her late 90s.

We, the family along with her church family, students she taught, people she worked with, friends and even those who cared from her in her later years, gathered together this past weekend to celebrate her life. And celebrate we did--few tears and lots of laughing and sharing of stories. 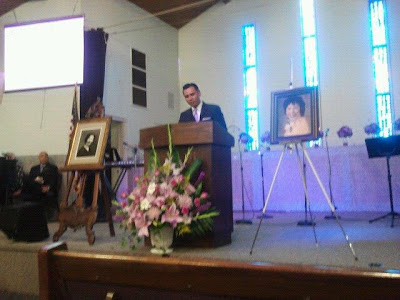 Note the color scheme and the color of the preacher's tie. He said it was Flossie's favorite

The gathering was also kind of a family reunion. Many of us haven't seen each other for a long, long time. 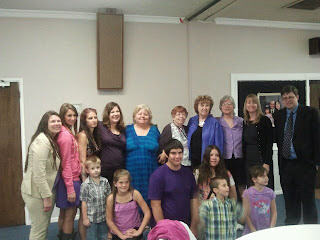 This is only some of whom came: my son Matt isn't in the photo nor is Flossie's stepson and his daughter who were also there.

It was a 3 1/2 hour drive to Southern California and the traffic was horrible--Memorial weekend--but it was well-worth the trip.

I had several aunties, but Flossie was always a favorite. I loved to hear her stories--though she and my mom often had different version of the same tale.

Okay, I know I was going to quit telling family stories, but I just had to do this one. (Yes, I'm still writing and promoting my latest book, No Bells, which is now available on Kindle and the Nook.