I was recently asked to be the moderator for an author panel at Malice, Dirty Little Secrets: An Inside Look at the Writer's Life. A friend of mine, the lovely and talented Laura Bradford had the idea for a fun new panel that would shake things up a little and allow a group of fans a little deeper into the minds of authors. I instantly said yes because … who wouldn’t?

I spent reading up on the panel authors. I sent emails introducing myself. I drafted bios. I crafted a set of questions so numerous that I could host this same panel for five more years with no extra work. I was determined that this panel would be the funniest, most fun, most uproarious panel ever in the history of Malice. The night before I swapped the order of the question cards so many times it’s a wonder I didn’t show up to the panel with my hands swathed in yards of gauze to protect my paper cut laden hands. I settled on just the perfect seven questions I thought we could get to before time ran out.

The morning of the panel dawned … well, I am not sure how it dawned because I was so focused on not screwing up the panel that a zombiepocalypse could have occurred and I would have been oblivious. Plus I was severely sleep deprived from the socializing the two previous nights. Punch drunk on caffeine and nerves, hyperventilating is just really not the way you want to head into a public speaking engagement is all I am saying. Had just one of my handicaps not been in play I might have noticed that Question Number Four was a bad idea. 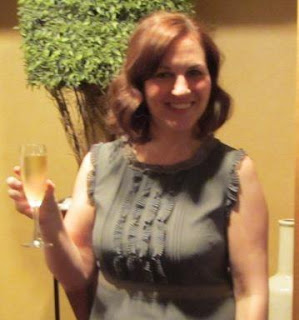 “What is the kindest thing someone has done for you in your life?” The words were out of my mouth, amplified through the microphone, out in the crowd and up in the recording being made in the bowels of the hotel when I realized I knew what Laura could answer. What she then did answer.

A few weeks before, I had done the MS walk to raise money in Laura’s name. I know that she considers this a kindness but what I did was very selfish. I did it for no nobler a reason than I want this special, wonderful person around, happy and healthy for a very long time. She makes my world better.

During the telling, Laura gets choked up and then with a prickling of tears in my eyes, frantically, I look for something, ANYTHING that isn’t one of the crying people I am sure is in the audience filled with our friends and lovely strangers.

My boisterous laugh riot panel has now become the panel where people cried. My heart fell. This was not what we had envisioned or planned. People wouldn’t remember Jeff Cohen’s schtick or Robin Hathaway recounting that 17 people is really too many to kill off in chapter one. No, people would remember our panel as the one with the crying. Which … is actually better, I think. They got An Inside Look at the Writer's Life which is what I was hired for, after all.

Aimee Hix is a wife, mom, a friend and a professional Statistician (sadly, it’s not as sexy as it sounds).  She is the rare breed of Northern Virginia native that has live there all her life, much to her chagrin.
Aimee is a pre-published author and a movie reviewer for the Flixy Mom blog (flixymom.blogspot.com) proudly providing family movie reviews for parents by parents.