We weren’t really an animal family. Growing up we had two dogs. Muffin was a Lhasa Apso, and the cutest little lap dog.  My brother then got a dachshund that he named Chili -  a chili dog - who was adorable, but also a pain in the butt. That dog would bark at the wind. 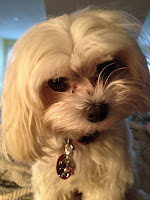 I’d never really had much of a desire to have a dog of my own. I am out of the house for work 12 hours a day, and it wouldn’t be fair to leave a dog locked up all day like that. About nine years ago my parents got a little Maltese puppy and named him Max.  For about a minute I thought about getting a puppy myself. But again, the work issue came up. I just couldn’t do it. And my parents had been pushing me to get a puppy for a while.  Because I live with a treatment resistant type of clinical depression, my parents felt it would be wonderful for me to have a little companion around. Someone I could take care of and that would love me back unconditionally.

One weekend about four years ago, my parents needed me to take care of Max.  I had a blast with him. And by the time Tuesday rolled around, I realized I really missed having him around. Dad and I sat down and talked. I told him how surprised I was to find myself missing have Max there.  (Now mind you, since Dad had  been after me for a while to get a puppy, I just got the “I told you so” look.)  I again reiterated my concerns about leaving the dog alone for 12 hours a day, and I got this in response: “Lori, you work for me. You’ll bring the dog to work with you every day.”  Well, that was easy.  The next day he called the breeder who he got Max from, and she just happened to have two puppies left from her last litter, each about six months old. She had a boy and a girl (Max’s niece and nephew). We set up a time on Friday night to go and meet with her. Before we even got there my parents were insisting I take the boy. “Boys are easier, you want the boy!”  Well, the three of us took one look at the two puppies, looked at each other, and said ,“ We’re taking the girl!”  And since Dad was being so generous in letting me take her to work, I named her Sadie, the name he had planned to give the girl puppy my mother wouldn’t let him get.  The next day I brought her home. 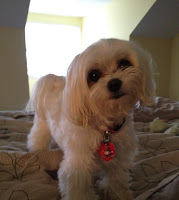 Never in my life did I think that something so little in size would have such a big impact on my life. From day one, she was stuck to me like glue. Every single place I went, she went.  I should have named her Shadow, because she still follows me everywhere. If I get up to turn the light on, about three feet from where I’m sitting, she hops off the couch and follows me. Even though she can see me right from where she is sitting.  She’s got to be right beside me at all times.

I would always hear people talking about their “fur babies” and not really get the attachment. Now I do!  She’s my baby, and I would be lost without her. She’s playful, happy, and such a snuggler.  Not only did Sadie change my life, she also saved it. She gives me unconditional love, covers my face with kisses when she knows I’m down, and loves to hold my hand while she sleeps.    I can’t imagine my life without her.

Here are some dog related series I think you'll enjoy!