You see, on that heart-changing day so long ago, I was in a tough place. I’d miscarried eighteen months earlier and found myself struggling to get pregnant again. All my life I’d wanted to be a mom and it wasn’t happening. Part of me felt like a failure, and part of me just felt empty.

For my twenty-fifth birthday, my then-husband surprised me with a trip to the animal shelter to get a cat, something, I imagine, he hoped would help to get my mind off the elusive prize while simultaneously taking the edge off my need to nurture.

I didn’t know where we were going until we got there and parked in front of a run-down building with a large window. At that window sat a little black and white cat who kept her eyes on me as I stepped from the car and approached the building.

When I went inside, the animal shelter folks told us to look around, pointing toward the room with the window. Inside the room were lots of cats—several of whom were trying to pick a fight with that little black and white cat. She, in turn, merely looked away, doing her best to ignore them.

Without so much as a moment's hesitation, I walked past all of those other cats and chose her as my own.

That’s the day Hobbes became part of my life.

That night, she cried outside my bedroom door until I came out to comfort her.

Through the years that followed, she took over that role…for me. 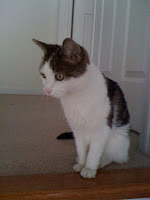 Hobbes became my best friend. She saw me through my pregnancy with Dear Daughter # 1 and then Dear Daughter # 2. She helped teach them to be gentle and kind. She taught us about loyalty. If we played outside, she watched from the closest window. If we played inside, she was always within arm’s reach…supervising. And when I sat in one place for longer than a minute, she was on my lap, purring as loud as she could.

She was a wonderful confidante.

She was a wonderful friend.

She was the epitome of pure, unconditional love.

In 2007, as we were separating, my then-husband asked if Hobbes could stay with him for a little while. I agreed out of kindness. Two years later, when we moved to New York and it was time to take Hobbes, my daughters needed her to be there for them when they visited their father. They needed her presence in the house, her cuddles in their beds, her purr to make things right. So, once again, I agreed. For them.

In 2010, when the girls were finally ready and eager for her to live out the rest of her life with us, I asked for Hobbes. My request was denied and I never laid eyes on Hobbes again.

That day, too, is one I will never forget. But instead of teaching me to focus on the pitfalls of being kind and selfless, that moment brought home what Hobbes had taught me and my girls...

Every time the girls saw her, they told her I loved her and missed her. They told her I wanted her with me but that, short of that, she was with me in my heart. That no one could ever take that away.

News of Hobbes’ passing came last year. To say I hurt all over doesn’t even begin to describe that moment…that whole day…that whole weekend.

I still miss her. Every single day.

My life changed the day Hobbes and I found each other. Because, for the first time ever, I knew what it was to be loved without hesitation and judgment. She was, without a doubt, the best friend I’ve ever had.

Now tell me about your Hobbes...
Posted by The Stiletto Gang at 12:30 AM