I’ve been on novel hiatus for a few weeks—okay, maybe closer to a month. Savvy writing advice suggests novelists start another project immediately after finishing one.  Unfortunately, this strategy is not in my author DNA.  I need a break. Novel writing is hard work, and my muse is a lazy soul.  With this mindset in motion, it’s not long before a writing sabbatical lulls me into a Haagen-Daz, what’s my purpose in life, mode. It’s a slippery slope, though I slide willingly—onto my living room sofa.  From here I drift, like a garbage barge on the ocean, toward the oasis of reality TV.
I retreat to the Food Network where distraction is a staple menu item. This is low-maintenance reality TV.  There are no dysfunctional families to sort through; no convoluted backstories to grasp, meaning you can pull into Diners, Drive-Ins and Dives anytime.  Here, bleach blond, spiked-haired host Guy Fieri travels the country, visiting quirky road-kill um, roadside restaurants. At a glance, one can presume that lax sanitary conditions are meant to be a metaphor for atmosphere. During these visits, Fieri ingests enough lard-based house specials to be on prepayment plan for his future triple bypass.  Sadly, one can only stomach so much of Fieri’s orgasmic reaction to pork parts slathered in Jimmy-Joe’s volcanic hot sauce, and I move onto Chopped. 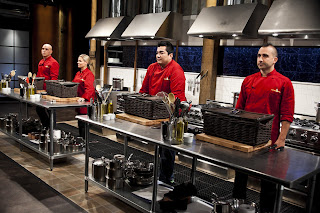 I am amused by this post-Julia Child generation effort, a program that is not so much about cooking as it is about the $10,000 prize. The money is poised to transform any one of the competitors’ lives. Seriously? Ten-thousand bucks is all it’s gonna take to turn your life around?  Most contestants want to open a restaurant. Unless the plan is to open a restaurant in their basement, ten-grand isn’t enough to keep a diner in doughnuts, never mind using it as venture capital. Regardless, you have to love the show’s energy. Four wannabe Emerils put their creative and cooking moxie to the test by using secret basket ingredients such as tree bark, goat urine, and Japanese jellyfish to prepare their dishes. Sometimes I feel for the contestants, but mostly I sympathize with the judges who have taste test the results. 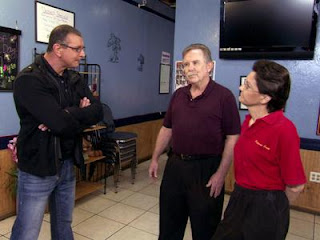 I am restless, needing something with more substance. I stick with the Food Network and tune into Restaurant Rehab.  This is boot camp hell for wayward restaurateurs. Have the '80s called asking for their mauve drapes and mirrored walls? Do you employ your toothless, recently paroled cousin as your chef?  Is your staff under the impression that they are indentured servants, too stupid to quit, trapped like rats on a sinking ship? Well then, enter iron-armed, drill sergeant chef Robert Irvine.  This guy looks like he bench presses Viking stoves for fun.  In forty-eight hours Robert is going to fix everything from the décor to the cousin, perhaps sending him for dental implants before the grand reopening. Frankly, Robert scares me. But maybe that’s what it takes to rewire thirty years of learned behavior in thirty minutes. Assuming he understood the premise of the show before he signed on, Chef Robert appears oddly outraged to find himself thrust into this hopeless mess. After berating the widowed proprietor for her inability to get a clue or at least a functioning carpet sweeper, he tears apart the dining room décor. Usually, this is cavernous square footage that could seat hundreds. It occurs to me that the real problem is location. The rehab restaurant is almost always situated in a pea-size town, bypassed by the bypass a decade earlier. Nevertheless, Robert goes to work ushering in his design team. Now, if you look closely, you’ll recognize Taniya Nayak, his go-to designer.  She’s a decorating refugee from HGTV and saddled with the dilemma of stretching a $10,000 budget to cover the 100K makeover the place truly needs. She also appears oblivious to her short of end of the stick. Taniya’s chipper attitude never wavers. Not even when Chef Robert berates her for taking too long to execute an overhaul that, in real reality, should take six months. Someday Taniya will decide she’s had enough, taking kerosene and a match to the sprawling space.  In the meantime, Chef Robert heads into the kitchen to scream at um, mentor the chef.  As we suspect, this is a doomed encounter.  In no time, he’s made the ex-con cousin wish he’d violated parole.  But no worries, it’s all going to be okay; Chef Robert has a plan. He’ll teach the unskilled chef how to prepare foolproof dishes, complete with sauces, mastering each one before the grand reopening—which occurs in about an hour. Of course, this three-act drama plays out to perfection as Chef Robert saves the day. He waves goodbye to a restaurant brimming with happy diners and staff, insisting a call from Zagat is imminent. I flip Chef Robert off and sigh longingly at my pollen covered laptop. Novel writing would be  snap if only my next book had a slot on the Food Network.
Laura Spinella is the author of BEAUTIFUL DISASTER. A 2012 RITA finalist, the novel is the recipient of the NJRWA Golden Leaf and Desert Rose RWA Golden Quill awards for Best First Book, as well as a finalist in the Wisconsin RWA Writer's Touch award for Best Mainstream Novel. Visit her at lauraspinella.net.
Posted by The Stiletto Gang at 12:00 AM