Lessons Learned from Dancing with the Stars

I love Dancing with the Stars. Every Monday night if I'm not sitting in front of my TV, my faithful DVR is recording away every beat of every samba, rumba, quickstep or waltz that's taking place. I love the costumes, the music, the dancing, the so called "stars" and the professionals. Every season I quickly get attached to my favorites and agonize when they get voted off.

This season there's a lot of good going on. All the celebrities are decent dancers (with the exception of Psycho Mike and Wendy Williams who both quickly got the boot). I love that every week a different couple comes out on top on the Leader board and that as of right now, it's any one's season to win.

It occurred to me while watching this past week that there's a lot I could correlate between the show and my career as a writer.

First, there's the skill element involved. Every season there are celebrities who start out with an edge. Some previous dance experience. Or natural talent, that kind of thing. But then there is the celebrity who rises above their talent level with good old fashioned hard work. They continue to improve week after week and the audience sees this and rewards them with votes. These are my favorite celebrities. Like Emmitt Smith, the ex-professional football player who won his season. Sure, Emmitt started out with some rhythm, but by the end of the season he was a dancer.

Lesson learned? Work hard and keep working harder and it will pay off. Make each book better than the one before.

Then there is the judge's criticism. In case you've never watched the show, there are three judges: Len, Carrie Ann and Bruno. Sometimes I honestly think Len is smoking crack. But, I have to say, for the most part he's pretty consistent in what he likes. Len loves a good clean dance. He doesn't like the fru fru stuff. He wants to see the dance elements done properly. Bruno is more about the "feel". He's the emotion behind the judging and I love his crazy comments. Carrie Ann is somewhere in between Len and Bruno. She's also the Lift Nazi. Heaven forbid your feet come off the floor in a dance that doesn't allow it. She'll dock you a point for it. Count on that.

So here's the thing. The judges' opinion is important. They give you a score and that score is averaged in with fan votes and decides whether or not you are booted off the show. But you can't choreograph your dance each and every week to please the judges, because you simply can't please all three of them. You have to dance to entertain. To tell a story. You have to have fun out there. You have to take risks. The best dances do all the above.

Lesson learned?  Write the best story you can. Have fun. Take risks. Dare to go where no writer before you has gone. Never forget who you are writing for (and it isn't Publishers Weekly or Bookreview or Kirkus). It's for you and your fans (the people who buy your books!)

Every season, there are celebrities who earn my admiration and celebrities who end up disappointing me. The show puts a lot of pressure on the stars. Besides keeping up with a grueling dance schedule, many of them are still doing their regular job- filming talk shows, soaps, shows in Vegas, etc. I understand that the pressure can get to them, but there's something to be said about showing grace under said pressure. No one at home wants to hear about how horrible your life is because you have to catch your limousine or miss your private jet to go on your television tour and how you are working fourteen hour days to keep everything afloat.

This past week, super model Petra Nemkova got the axe. I was so disappointed! I'll be honest, I had no idea who she was before the show. But I sure do now. She's a survivor of the 2004 tsunami that hit Thailand. Her fiancee was killed and Petra suffered serious injuries. She has since founded a charitable organization called Happy Hearts Fund that helps children who have suffered through a natural disaster. Petra was not only beautiful and a graceful dancer, she let us see her heart. She made herself vulnerable. She took the judges' criticism like a trooper and vowed to work harder each week. The show is really going to miss her.

Reality star Kendra Wilkinson, a former Playboy bunny and Hugh Heffner love interest is another story. I'll admit, at first I kind of rolled my eyes at Kendra. But I saw her working hard week after week and I began to really like her. Then last week, she kind of got into a brouhaha with Judge Carrie. Kendra blew her dance and instead of taking the judges' criticism like a woman, she interrupted Carrie's critique and told her she didn't care about being elegant. I'm not sure how Kendra survived last week. The judges gave her extremely low marks and you would have thought that the American public would have kept their votes to themselves. Still, I think Kendra's days are numbered. No body likes a crybaby.

Lesson learned? Criticism is there to help you grow. Listen to it, take what you can from it and be better. Show your audience your vulnerabilities. People love people who are real. If you can't be a professional, at least learn to hold your tongue.

So that's it. My Dancing with the Stars lessons on writing. This season I'm rooting for Ralph (Karate Kid) Macchio (who knows how to take criticism with a smile), Kirstie Alley (who shows us her vulnerabilities and makes us like her more each week), Hines Ward (who works harder each and every week to improve) and Chelsea Kane (who takes the big risks and gives the audience a super performance each and every time)! 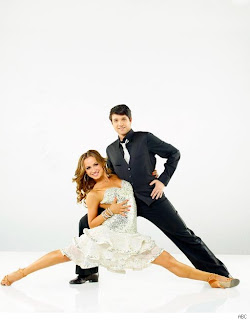