Thanks to the Stiletto Gang for inviting me here today.

Since my new release, Swift Justice (St. Martin’s Minotaur, 12 Oct 2010) is a humorous, soft-boiled private eye novel, some readers who know my amateur sleuth books (I write the Southern Beauty Shop series as Lila Dare) have asked why I’ve made the switch from amateur sleuth to PI. I’ll tell you: it can strain an author’s creativity to keep coming up with *good* reasons for an amateur to poke her nose into murder investigations. It’s much easier to have clients come to a PI and pay her to investigate.

Readers of amateur sleuth mysteries kindly turn a blind eye most of the time, not questioning why an elderly woman in Maine would trip over a body every time she bikes into town (would you move to Cabot Cove with its murder rate?), or how come knitters and scrapbookers drop dead so frequently. And don’t get me started on the number of customers who end up murdered in food establishments: coffee shops, caterers’ kitchens, bakeries, tea shops, cheese shops, cookie/cupcake emporiums. It seems like one in every twelve restaurant customers gets bumped off. If Applebee’s had stats like that, they’d be out of business in a week.

With tongue only slightly in cheek, I offer this Top Ten List of Why Amateur Sleuths Involve Themselves in Murder Cases:

10. The soon-to-be-sleuth is the police’s main suspect.
9. Her spouse/ex-/friend is the murder victim.
8. The murder occurs in the amateur sleuth’s place of business.
7. The main character is a nosy old biddy with nothing better to do with her time now that she’s retired, unemployed, or dead (a nod to Carolyn Hart’s mystery-solving ghost).
6. The protagonist needs a good way to meet hunky cops, EMTs and firefighters, and figures hanging out at crime scenes is a better way to meet men than joining a Jane Austen book club.
5. The amateur sleuth wants to one-up her cop or reporter boyfriend/husband by solving the case before he does. Note: This approach does not result in relationship longevity.
4. The main character is a reporter who knows that the obvious suspect—the guy or gal the cops arrested—is never the real killer. The silly cops are almost always led astray by clear motives and actual evidence.
3. The murderer is after the protagonist and s/he must identify the killer to avoid becoming the next murderee.
2. The sleuth's life is so humdrum that she appreciates the shot of adrenaline she gets from stumbling over corpses, dodging bullets, and getting arrested.

And the Number One reason an amateur sleuth gets involved in a murder case is . . . Her feline companion sticks his curious nose in, leading his mistress from clue to clue, and identifies the villain (probably saving the world and all humankind in the process) just in time for kitty kibble and a nap. What other reasons are there for hairdressers and librarians and booksellers to get involved in investigating murders? Best idea gets a signed copy of Swift Justice. 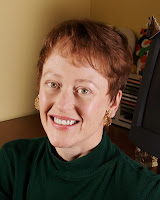 Laura DiSilverio spent 20 years as an Air Force intelligence officer--serving as a squadron commander, with the National Reconnaissance Office, and at a fighter wing--before retiring to parent and write full time. She resides in Colorado with her hubby, tweenage daughters and dog, and is currently working on the second Charlie Swift book. Visit Laura at http://www.lauradisilverio.com/.


Swift Justice: When Charlotte “Charlie” Swift, former Air Force investigator turned barely-solvent Colorado Springs PI, confronts an armed woman in her office Monday morning, she knows the week is going to suck. And when she finds out she must accept the intruder, Gigi Goldman, as her partner in Swift Investigations, she hatches a plan to get rid of the pampered, mid-fifties socialite who has none of the qualifications or abilities, Charlie’s sure, to succeed as an investigator. As if having to deal with Gigi weren’t enough, Charlie must also solve a missing person case involving an abandoned infant, a long-ago adoption, and a client who wants to offload her grand-child on the daughter she’s never met. Huh? And, of course, there’s a murder . . .

“Swift Justice . . . may appeal to fans of Janet Evanovich’s Stephanie Plum and Lula. DiSilverio deftly mixes light, zany humor with the darkness of the crimes. Readers will leave this one impatient for the next book in the series.” Booklist, Starred Review

“This is a delightful series debut, full of zany humor and female bonding. Sure to attract fans of soft-boiled and chick lit mysteries.” Library Journal

“A winning debut . . . with an engaging community of characters readers will want to revisit.” Publishers Weekly
Posted by The Stiletto Gang at 5:00 AM