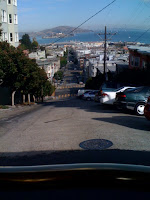 I took this photo while on a cable car tour of San Francisco, showing one of many steep, steep streets in this most beautiful city and the setting for this year's Bouchercon.

Bouchercon is the largest mystery con there is and I've been to several in various cities: my first was in Monterey, CA, and hubby and I went together to Madison and Milwaukee, WI, Austin TX, and a couple of other places I can't really remember right off. One of the pluses is visiting places you might never choose as a destination.

If you ever wanted to meet a particular famous mystery author Bouchercon is the place to do it. This year some of the greats in attendance were: Lee Child, Laurie R. King, David Baldacci, and someone spotted Sara Paretsky, and so many more.

However, that's not the reason I went to Bouchercon. I also didn't go to sell books as I knew the competition would be horrendous. There's nothing worse than attending a signing with long lines heading to Michael Connelly (yes, he was there) and sitting alone and forlorn with no one waiting for you to sign a book. In order to have books in one of the bookstore displays, I would have had to bring mine. This year, I decided that I wasn't going to worry about selling books, though I did hand out my card with my latest book cover on it to new people I met, my main purpose would be to have fun.

Having fun I did, from the 3 hour cable car tour all over San Francisco on cable cars that had been transformed into busses, to attending the Private Eye Associations award dinner where Marcia Muller was given an award. (Marcia Muller was the first author I ever met in person years and years ago.) She was in attendance with her husband, Bill Pronzini.

With my roommate, Gay Kinman, I walked all the way to the hotel from Chinatown at 10 p.m. at night. Fortunately, the road was downhill all the way. Also with my roommate, I toured the wharf area and all the shops and ate delectable meals in some upscale restaurants.

The Sisters in Crime, No-Cal MWA branches Hospitality Room was a great place to meet people--as was the bar. I was invited to eat breakfast with people I didn't know-and soon became friends.

I participated in a Continuing Conversation titled Procedural Pros with DP Lyle, Robin Spano, Michael Black, Dennis Palumbo, Laura Caldwell and Michael Norman. Though I've never considered myself a pro, I think I held up my end pretty well.

Yes, I had a good time. One really big plus was meeting a fellow Stiletto Gang member, Rachel Brady. We had a short chat when the cable car made a brief stop.

Going to a Bouchercon is an experience. It is not necessarily a great place for a small press author to promote books, but it is a place to meet a lot of people, talk about mystery writing, and have a really fun time.

Marilyn
http://fictionforyou.com/
Posted by The Stiletto Gang at 4:19 AM