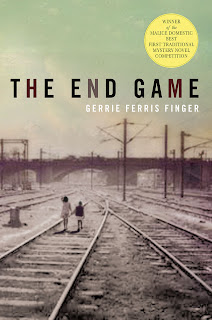 Since the Stiletto Gang are women writers on a mission to bring mystery, humor and high heels to the world, I'll write about the evolution of heroines in mysteries.

I'll compare my own Moriah Dru, heroine of The End Game to the women of mystery from the turn of the century to today. Dru wouldn't wear stilettos, although she might wear a pair whether I want her to or not. At six feet tall, she'd feel at home in a room full of basket ball players. With her intelligent blue eyes, ironic sense of humor and athletic prowess, she's be shooting hoops with the seven footers without turning a shapely ankle. She keeps her body strong because the world in which she exists is tough even for a man. Having left the Atlanta Police Department, she turned child finder. In The End Game she and her lover, Richard Lake of the APD, must find two young sisters before they are taken out of the country to be sex slaves.

Dru grew out of a succession of mystery heroines that began (in my opinion) with Mary Roberts Rinehart's "fem jep" heroines. Rinehart's female protagonists had to be rescued, or, in later days, had to rescue themselves. Her stories were of the "had I but known" school. Which inevitably leads to Agatha Christie and her Miss Marple, the eccentric, who believed all evil was reflected in someone she knew. She, like her male counterpart, Sherlock Holmes, solved crimes by cerebral analysis.

To me, Nancy Drew is the prototype for the modern strong woman in mystery. Created and written in the 1930s by a series of writers called Carolyn Keene, Nancy never met a dangerous situation she couldn't handle. She may have gotten into the "too stupid to live" camp by her tenacity, but she changed the perception of the "hero" in heroine.

Moriah Dru and her contemporaries share a passion for truth and justice and they understand human motivation and the evil that comes from lust or greed or any of the negative aspect of the human soul. These protagonists connect with victims, seeing them as individuals with personalities rather than puzzle pieces to be moved on a board. In The End Game Dru doesn't interact with the abducted children, she "sees" them through the neighbors and mentally connects to them by feeling the horror that awaits at the hands of people without conscience.

The modern heroine must experience change. In a stand-alone novel, the heroine has a arc – a slow realization or an epiphany that enables her to understand herself and her motivations. In a mystery series, the heroine has more time to grow and change. Miss Marple never changed; on the other hand, Christie, who had many personal tribulations herself, made Miss Maple so engaging that we understood her stock character and looked forward to the puzzle.

Today's mystery heroine can be found in every genre and sub-genre. At one end of the spectrum is the cozy. Our intrepid sleuth must have a dauntless streak without being obnoxious or wooly. She will hold fast to things she believes in. She can be an amateur caught up in murder or a professional who investigates and competes with men. At the other end of the spectrum, the hard-boiled heroine can be like tiny Munch Mancini, created by the late Barbara Seranella. Munch is a former prostitute and junkie who's trying to get her life on track by fixing cars. You feel her despair, but through her heroic acts and good heart, you root for her redemption. Now that's a strong heroine.

Gerrie Finger
_____
Gerrie Ferris Finger is a winner of the Malice Domestic Best First Traditional Mystery Novel Competition. She lives on the coast of Georgia with her husband and standard poodle, Bogey.
Posted by The Stiletto Gang at 5:00 AM