How Sexy Shoes Will Write This Book

I've just started my third novel. Historically, these things take a while for me to finish. Four years for the first, two for the second. It'd be really nice to do this one in a year like normal writers.

My friend Laura is at the beginning of a project too. Check out her blog, One More Thing to Feel Guilty About. The woman is hilarious, and unfortunately that becomes frightfully important when you see where this story is going. Anyway, we agreed to keep each other honest this year as we muddle through our first drafts. Over dinner, I told her I was contemplating the idea of paying her a fee if I didn't hit my word count goal each week. She favored the idea, but having already run it by my husband, I knew that he did not.

"Then I'm going to have to do something to humiliate myself if I miss the count," I said.

She said, with a touch too much enthusiasm, that she'd like to participate in choosing what that humiliating thing would be. I'm afraid of her. Which is exactly why I said that would be fine.

At one point during the meal, I had a better idea:

"Yes, I'll starve myself. I'm sure if I starved for a day I would never miss my word count again."

"I could do that too. We'd be looking pretty hot."

"The less we wrote, the better we'd look."

We decided that the use of fasting to incentivize writing could potentially be a conflict of interest.

Somewhere between my second and third enchilada, Laura asked me about the Stiletto Gang and wanted to know if I actually, in fact, owned a pair of stilettos. I couldn't just say yes or no, because the answer turns out to be quite involved. (Hang with me, it becomes important.)

Last April I attended the Malice Domestic Mystery Conference for the first time. On the evening of the Agatha Awards banquet, I changed clothes and joined everyone in the lounge area, where I found them all to be wearing full-up evening attire. I was in a casual dress. No big deal, I still had fun, but I did take note. Embarrassment leaves an impression, no?

Flash forward to my first Bouchercon World Mystery Convention last October. Now initiated, I shopped for some nice evening attire as soon as I sent in my registration check. This time, I'd fit right in. Got a cute LBD (little black dress) and some smokin' black stilettos. Packed them up for Bouchercon . . . where the banquet required a ticket that cost something like a mortgage. I did not attend, nor did my LBD or sexy shoes.

"So you see," I concluded, "I do own a pair, but I've actually never worn them."

None of that matters for now, but just store it in your short term memory for a sec.

Laura and I returned to the topic of how best to humiliate myself. I said, "Maybe I'll ask my blog followers and Facebook friends to suggest horrible things." Most of you reading this fall into one of those camps, so I'm sure you can imagine how colorful those suggestions would likely be. "Whoever chooses the winning punishment could name a character in the book they shamed me into writing."

This idea, we agreed, had merit.

But then after dinner, walking to our cars, Laura said, "What if you had to wear those stilettos to work?"

And we both kind of looked at each other like they do in the movies when the montage music gets cued.

"I didn't tell you the best part," I said. "They're strappy sequin stilettos!"

She burst out laughing. "People will think you have no taste."

Turns out, I actually don't have much, but it's easier to hide that when a girl wears business casual to work every day. Maybe it becomes more apparent when she adds sequin black stilettos to khakis and a polo.

"Of course," she added, "I would expect photos for proof."

"Can you imagine?" I said. "Stilettos and my NASA badge, in the same outfit?"

She feigned a pose. And so it was born. Either I'm getting a book out of this arrangement or you're getting pictures. 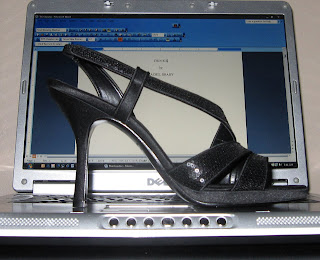