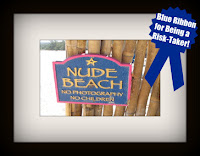 I’m going with a theme this week with blogging. Nudist resorts. Ever been to one? Want to? Would you if it was essential for research (or some other aspect of your life)?

I’ve been to a nudist resort, all in the name of research. See, in the currently-being-written third book in the Lola Cruz Mystery Series, Bare Naked Lola, Lola must go to a nudist resort to solve the case she’s working on. The question I’m faced with is: Will she, or won’t she--get naked, that is? Now, if you’ve read Living the Vida, Lola, you might be able to give an opinion on this. I know what my gut says, but I haven’t been faced with writing that particular scene yet so I can’t say for sure which way I’ll go with it.

I sort of imagine it as a Lucy and Ethel scene from I Love Lucy...all darting behind bushes and holding big leaves up!

But before I could write a single scene about a nudist resort, I had to go there and visit. And go I did. It was October, so the place was actually pretty quiet. People walked around with their shoes on and a towel slung over their shoulders (the towels are to sit on where ever you go, something I wouldn’t have known about had I not visited). Women are allowed to cover their bottom half during a certain time of month, but otherwise, if you are there, you are expected to be unclothed.

As I mentioned over at Good Girls Who Kill For Money Club on Monday, one of the most hilarious aspects was Nudestock (ala Woodstock)--and no, the bands didn’t have to be nude, although it was encouraged. Maybe Nudestock isn’t so different from the free-loving original, but still, it is something to see.

In book two of the my series, Hasta la Vista, Lola! (coming out in just 3 short months!), Lola didn’t have to do anything outrageous (other than breaking and entering, babysitting two nephews and a niece, and keeping her hands off Jack Callaghan), but there’s something so fun about putting your characters through something you’d never in a million years do. It tests you and your own boundaries and it can definitely make for hilarious scenes.

So here’s my question. What outrageous things have you done (in the name of research, or otherwise)? Would you visit a nudist resort? Just how daring are you?!

XO Misa
Posted by The Stiletto Gang at 5:00 AM