It’s that time of year again, when many little children (except for the ones who have parents who think that Halloween is for pagans; I, myself, worship at the feet of the god of chocolate) don costumes and roam the streets, looking for candy. And thank goodness they do! Mama needs a 100 Grand bar to satisfy that sweet tooth.

It’s not like the old days, though, when we used to get up early, particularly if Halloween was on a Saturday like it is this year, put on our flammable costumes, and roam the streets in groups, hoping not to be picked up by a serial killer, get an apple with a razor blade in it, or worse. I remember my mother sending us out, me in charge by age seven, and going up and down every street in our development, hitting every house until our environmentally-unfriendly plastic bags were bulging with candy. The rule? When your bag was too heavy to carry, you went home. Nobody in the group was carrying your bag for you (and yes, I’m looking at you, Colleen) so if you couldn’t heft it, you were out of luck.

To illustrate just how different Halloween now was from Halloween then, I’ve brought along a few family photos. Captions will explain who is who. Enjoy. 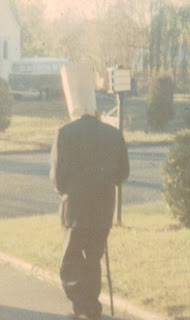 1. This is my grandmother. She took us trick or treating this particular year; I think it’s 1968. She thought it would be funny to wear one of her dead husband’s suits and put a bag over her head. It wasn’t. She scared half of the children in the neighborhood, not to mention the grownups. We left her home the next year. 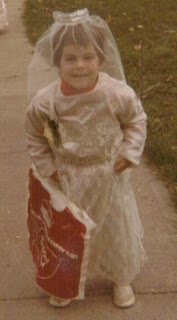 2. We call this one “Bride of the Living Dead.” This is my sister, Tricia, at four years old. I don’t think my mother was going for “recently exhumed corpse” with this look, but that’s what she got. 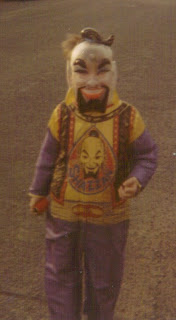 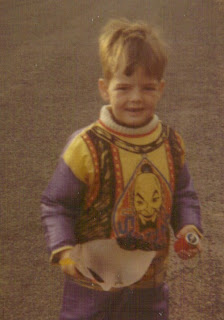 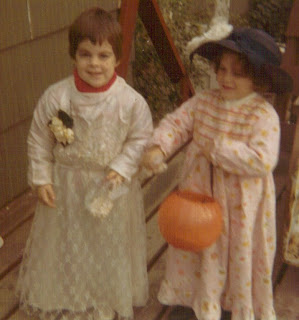 5. This one is from the “When Bad Costumes Happen to Good Children” collection, currently on display at the Smithsonian. Again, my sister and her friend, Janet, look far more sinister than I think either of their mothers intended. (Notice Tricia’s lovely bridal corsage; that definitely looks like it’s been underground for some time.) Let’s just say that my father knocked off of work from the police department early and came home only to see these two lovely creatures before they set out on their candy grab. He ended up running screaming from the house thinking that trolls had gotten loose from under a bridge. 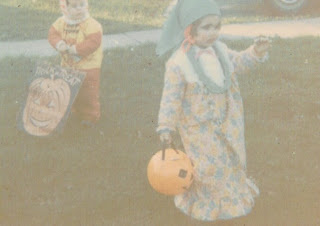 6. I think this might be a real gypsy. Note my sister’s concerned expression in the background. I think she’s been shaken down for all of her candy but she’s not sure how or why. 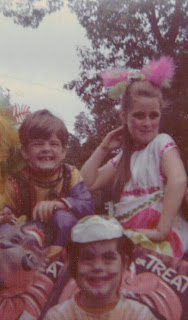 7. And here I am with two of my three siblings, further cementing my youngest sister’s contention that there are NO PICTURES OF HER.

I hope everyone has a safe and happy Halloween!

Maggie Barbieri
Posted by Dea, Kia, Jake at 5:00 AM