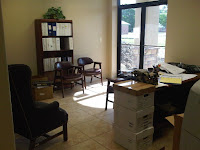 The new office is finally beginning to feel like some place I'm supposed to be every day – not just a port in the storm.

Readers that have been keeping up with my blog entries know that my new day job office was completed about a month later than promised. As a result my co-workers and I were forced to work from our homes and cars for about thirty days. It was fun for about two. 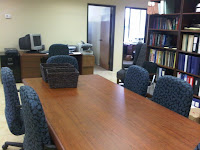 But that trauma is almost a memory (not really but I'm working on it). We moved in to our new digs on July 1. Movers brought our old furniture and files the next day and we've been unpacking boxes ever since, trying to become a functional office once more.

The Xerox machine was a week late. We've discovered we can do very little without a copier. Another week and we would have had to hire a scribe.

Our new furniture arrived last week. Now we have a mix of post WWII grey steel and 2009 extra special wood veneer particle board. Okay, the new stuff is better than that, but I bet the WWII filing cabinets still outlast our new ones.

The office is approximately 1700 square feet with tiny private offices along two sides and one large communal area that we've sectioned off with a wall of filing cabinets and bookcases. It's actually very nice. And the construction is mostly new – only the concrete slab and steel frame was left from the old building.

Tile floor is throughout, except for the small private offices. The builder ran out of time – actually I might have threatened to shorten his life span if he didn't hurry up – and he had to use carpet in the individual offices. After walking on the tile for a few weeks, I'm glad it's not all tile – my joints are protesting.

The building we leased for fifteen plus years before our move was in terrible shape. No upgrading or maintenance had been done for most of that time and we had to get out. We were demanding improvements and the landlord didn't see the need. The old space was a little bit larger and had a store room we miss, but we surely won't miss the leaky roof, intermittent heating, or rampant rodent infestation. Seriously, last winter we were almost overrun by mice.

Anyway, that's all in the past. The parking lot here isn't finished yet, but in another couple of weeks that will be done. I have a glass door in my new office (instead of a window) and I can watch the workmen pouring a new sidewalk within inches of my door. 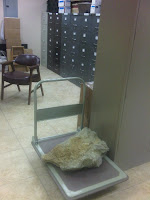 Will be a great place for a pot of flowers or my rock. Yes, I have a rock. A big rock. It was thrown by a blast from a mining company through the roof of a residence. I keep it to remind me, and the mining company, why the mining regulations are so important. At 150 pounds it's a little big to move around, but it really makes my point at hearings.

I'm glad to be in the new building, thankful the move was paid for before the state's economy went south. In Oklahoma we're only now beginning to feel the pinch that other states have been dealing with for awhile. Our agency budget has been slashed for the next twelve months. I think we'll have to buy our own ink pens and paper this coming year, but we also won't be fighting off invading hoards of mice – seems like a fair trade to me.

Back to the printer, it's sitting on the floor. We don't have a spare piece of furniture that is big enough or sturdy enough to hold it. If we plugged it in now, the printed documents would be shooting out across the tile floor and landing under the new conference table. I'll have to figure something out.

Hey, if the public complains about state workers laying down on the job, you'll know at least one reason – no printer stands.