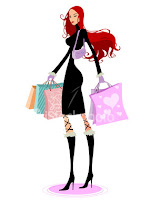 When I was a kid, shopping with my mother was an adventure. You got dressed up in your "good" clothes, went downtown, had an adult salesperson who remembered your name help you, bought what you needed, charged it on a store charge account, and then had lunch in the store restaurant that had linen napkins! There were three department stores in town, my mother had a favorite, and we probably did 90% of our shopping there. I believe I just outed myself as old, old, old.

But today, especially in this economy, I feel like shopping isn't so much an adventure, as a big game, and I'm constantly losing. Store loyalty? I don't think so.

Last week, I had a series of doctors' appointments. The only reason this is significant is because I was unable to go into a certain store with my daughter on Tuesday. We arrived on Wednesday afternoon and she selected a significant amount of clothing that added up to $300. To me, that's a lot of money. Maybe not as much as Tori Spelling drops on one outfit, but still a chunk of change that I would think any store would welcome.

We got to the checkout, and there sitting on the top of the register, was a sign that said, "10% off every Tuesday." I thought for a moment and asked, very politely, if there weren't some way to take advantage of the sale since I had been unable to come to the store the previous day. The two young saleswomen said "no." I asked to speak to the manager. They looked at each other, then one nodded to the other as if she were the one in charge, and she again repeated that there was nothing to be done.

Now I'm sure an argument can rightly be made that rules are rules, and that I was only entitled to the 10% discount if I had arrived a day earlier -- or were willing to wait another week. But it just seems stupid to me to sacrifice a hefty sale like that when I was in a national chain that has had plummeting profits for months. Nor does it make much sense to essentially tell me I was a chump for paying $30 more than I would have a day earlier. Or that for all practical purposes, the store was suggesting that you should only shop on Tuesdays, otherwise there were penalties to be paid. In short, I would suggest that if nothing else, they should have taken down the sign.

So I voted with my feet and walked out. I didn't feel a bit triumphant. In fact, I apologized repeatedly to my daughter, who kept reassuring me that she completely supported my decision.

The final coda to this retail tale was found online. I ran a Google search and discovered that if I signed up for email alerts from this national chain, I would receive an immediate $15 credit plus free shipping. I found 5 of the 7 items and ordered them. The company still lost approximately $100 since they didn't have two of the pieces my daughter had wanted.

But is this any way to run a business? I get that there are rules -- but was it worth it to that local branch to lose a good sale? Had the help been clever, they would have at least suggested that my daughter open a store charge account in her name and get an immediate discount. But today, too often the personnel don't care about the customer or about the company that employs them - and I suspect the company doesn't show much concern about employees or customers.

What do you think?