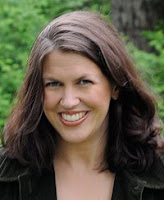 In 2008, Stefanie Pintoff became the inaugural winner of the St. Martin's Minotaur / MWA Best First Crime Novel Award with her novel, In the Shadow of Gotham. It is the first in a new series where early criminal science meets the dark side of old New York. A graduate of Columbia Law School, she also has a Ph.D. in literature from New York University. A former attorney and teacher, she now writes full-time and lives in New York with her husband, daughter, and their family dog. Her second novel, titled The Darkest Verse, is forthcoming in 2010.

My debut novel, In the Shadow of Gotham, was published by St. Martin’s Minotaur almost three months ago. The experience of having a book in print is at once exhilarating and more than a little scary.

There are moments when you feel on top of the world. Seeing your book on a local bookstore’s shelves. Getting a call asking you to come back and sign more copies, because they just sold out. Seeing a great review. Getting letters and emails from readers who want to tell you how much they enjoyed the book – and can’t wait for the next one.

There are other moments too, of course. Worrying whether readers – and reviewers – will like it. Whether anyone will buy it, or want to come to my signings and events.

I’m told that these highs and lows are par for the course – part of any author’s life, whether the first book or the twentieth.

My goal is to take it all in stride. Celebrate the highs and downplay the lows. Well, this is easier said than done. But, I guess I shouldn’t complain. After all, I have the perfect role model living under the same roof as me: another member of my family with literary chops, who couldn’t care less about book reviews or sales figures. My dog, Ginger.

She is a mixed breed – part golden retriever, part standard poodle. People call her a goldendoodle, though neither my husband nor I manage to say it with a straight face. She’s a great dog, despite the ridiculous name.

Ginger beat me to publication by about three years – for her book, Goldendoodle, released by Kennel Club Books, came out in June 2006. Ginger, of course, did not write it; her breeder, Kathryn Lee, is the author. But Ginger is the face of the book – the cover dog, so to speak. And once Ginger was chosen (she’s featured in additional photos inside the book as well), we were invested in what we came to consider “her” book. [please insert photo of Ginger book cover]

And Ginger treated the publication process exactly as one should. She had nothing but fun!

It started with the day that professional animal photographer Mary Bloom came to the house for the photoshoot. Ginger was brushed and coiffed, then taken outside to secure the perfect photograph. Mary needed a particular look: paws in a certain position, head facing front, and of course – the right expression on Ginger’s face. To us, it looked like work. To Ginger, it was all about the rewards – toys and cookies – for a job well done.

Three years later, I experienced a mild case of déjà vu. My friend and professional photographer Alison Sheehy came over to our house. I was brushed and coiffed, then taken outside in search of the perfect book jacket photograph. Ginger came, too – and I was reminded this was meant to be fun, not stressful (although, I think, Ginger was imminently more successful in this endeavor once again).

Well, we bought Ginger’s book and so did our family and friends. We talked it up, displayed it on our coffee tables, and enjoyed the moment.

Now we do much the same, but with a certain New York turn-of-the-century historical mystery novel.

Just checked Amazon. At the moment of this writing, my novel has a higher ranking than Ginger’s book. Ah, but Amazon rankings are fickle things, with plenty of highs and lows for all but the most established bestseller. And Ginger’s book continues to do well, even after three years. Not only is it well-written, filled with good information by a respected breeder, but it’s also chock-full of adorable puppies and dogs.

Ginger has the perfect attitude. Have fun and enjoy the attention. Ignore what is beyond your control. Because having a book out – and a dream realized – is a treat worth savoring.

Stefanie
Posted by The Stiletto Gang at 5:00 AM

Email ThisBlogThis!Share to TwitterShare to FacebookShare to Pinterest
Labels: Goldendoodle, In the Shadow of Gotham, Stefanie Pintoff