Coming In for a Landing!

July 1, 2009, was the day of the big office move. I've mentioned before that my day job is with the Oklahoma Department of Mines. I've been there 25 years this month. About 20 of those years were spent in a rural field office. The building was nice when we moved in and after the landlord changed, became steadily less nice over the years. A total lack of maintenance will do that to a structure. Have you seen that television special on one of the science channels about would happen if all humans were gone tomorrow? It uses special photographic effects to show how long it would take for the plants and animals to remove all traces of human occupation. Doesn't really take long. I imagine if the landlord doesn't get a new renter in the next few months, that building will disappear as the plants and animals take it over.

The new office space was a long time coming. There is a standard 3-4 months of red-tape involved in any relocation of a state office. That's if everything goes smoothly and the new building is vacant, meets state building codes, and the price doesn't exceed price per square footage caps. The building we just moved into had to be remodeled before we could move in. The building was gutted, exterior walls removed, exposing the steel bones. The roof was left on, but before the remodel was over, it was replaced. All the plumbing was replaced. And while all that was going on – it rained. It rained for a couple of months straight. My carefully planned move schedule was doomed.

We moved out of our old building on the last working day of May. That's right, May. For the entire month of June, my office has been my car and home. My employees have been working from home and another field office 60 miles away. It was fun for just about two days. Then it was just a hassle. Each day I drove into the town where the new office was, picked up the office mail from the Post Office (we had it forwarded to new address, then held as it became clear we would not have a June 1 move-in date despite the contractor's assurances). After collecting the mail, I would go to the new building and check on the remodel progress. Most days there was very little. 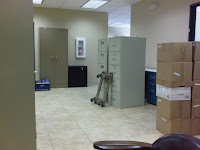 Before leaving the old office we had "surplussed" a lot of our elderly furniture and ordered some new stuff- some matching stuff. Note: a field office usually gets castoff furniture from the main office and the main office gets new furniture. Our field office was no exception. I was using some furniture given to the state from the federal government when they closed an office in the early 1980s. The furniture itself was from the post-WWII era. My desk was big – you could land a plane on it. It was all metal – the heavy stuff – with the soft gummy top that is usually covered with a sheet of glass. My desk didn't come with the glass so you had to be careful with what you set on the surface. A coffee cup ring was permanent if you didn't use a coaster. Anything heavier, you had a permanent indention. 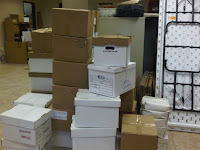 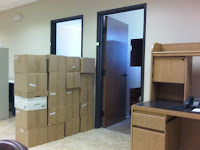 On July 2, we hope not only be in the new office with all our boxes and furniture, but to have internet service. When that happens, maybe the new place will feel like home – so to speak.

There are still about 100 boxes to unpack.

Rhonda
aka The Southern Half of Evelyn David
Posted by The Stiletto Gang at 5:00 AM