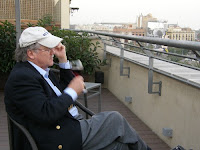 David Stewart (1938-- ) received the Ph.D. from Rice University in 1965 and taught philosophy at Rice University and the North Texas State University before moving to Ohio University in 1970. In addition to being a faculty member, Stewart served a variety of administrative roles at Ohio University including that of provost from 1993 to 1996. He was named Trustee Professor of Philosophy in 1996. Among his works on ethics are Business Ethics, McGraw Hill, 1996; Exploring Ethics (co-author), Prentice Hall, 1986; and Medical Ethics: A Reader (co-author), Prentice Hall, 1992. He is also author of Exploring the Philosophy of Religion (6th ed, Prentice Hall, 2006) and co-author of Fundamentals of Philosophy (6th edition, Prentice Hall, 2005). He has lived on St. Simons Island since 1997. After retiring from fulltime academic work he devotes time to a musical group, The Stewart-Law Baroque Trio, in which he plays harpsichord and enjoys traveling with his wife, Audrey.

After retiring from thirty years of full-time teaching I decided to write a mystery novel. As my wife and I were returning to campus one day, and just as we rose to the crest of the hill on the bypass that looks down on campus, she said, “It looks peaceful enough, but it’s a wonder that someone hasn’t been murdered.”

What? A murder in the ivory tower? It’s not really far fetched given the bitterness that often pervades relationships in any organization, and a university is no different. What might lead to murder, I asked myself. Denial of tenure? Fear of disclosure of a falsified academic record? Threats to make public plagarism in academic publications? Jealousy? Sex? Money?

I had written several textbooks, edited collections of essays, and published journal articles, but I knew that trade publishing would be a whole different thing. I searched all the usual reference books for agents whose interests reflected those of my book and began to collect rejection slips. After the number of those exceeded twenty, I began to think there must be a better way. A friend, who worked in book retailing, referred me to a press that he thought might be interested in my book, and I received a nice rejection letter stating that the book was not for them but seemed to the editor there to be perfect for the Mysterious Press imprint of St. Martin’s Press. I sent them a query and was told that they only considered submissions from agents. So, back to square one.

After concluding that agents were looking for the next John Grissom or David Baldacci, I looked for options. One was to publish part of the book on line and hope that after reading the free chapters interested persons would buy the rest of the book, download it and print it out. The complexities of that approach soon deterred me. I wanted to do something that would get the book noticed by a trade house and bypass the writer-editor-publisher track, so I turned to self-publishing.

We all have seen the vanity press ads: “Publisher seeks authors; Publication guaranteed,” and the result is a basement full of unsold books. And who wants to have the tarnish of vanity publication? Getting past that was difficult, but I became convinced that self-publication is different, especially when I found out that iUniverse was owned by Barnes & Noble. One can purchase several different publishing packages from iUniverse, even including editing services. All offer a reader’s report; mine, I am happy to report, got an “editor’s choice” award, and after publication I purchased several advertising opportunities, again hoping to get noticed.

Self-publishing as practiced by iUniverse is publishing on demand. Order the books, and they print them up and ship them out. I have a listing for Murder Most Academic on Barnes & Noble.com, and anyone can order a copy there, as several readers did. The thing about self-publishing is that the author has to do the work of promotion and marketing, which iUniverse aids by offering extensive marketing manual, bookmarks and business cards. The iUniverse contract gives the copyright to the owner and encourages its authors to land contracts with trade publishers.

I have no quarrel with iUniverse; they did everything they promised to do, but my book never got noticed by a trade house. It is my own fault, I’m sure, as I never got into the spirit of self-promotion and marketing. However, it was fun to see the book in print. I bought copies for family and friends, and I have never regretted the decision to self-publish.