Thrillerfest XIV: Experience of a Lifetime


I have been to my first Thrillerfest conference! I have to tell you all about it and why you may want to consider attending it next year. For anyone who isn’t familiar with it, let me give you a brief introduction. Thrillerfest is multi-day event that takes place annually in NYC. It is attended by a wide array of thriller authors, industry professionals, and fans. 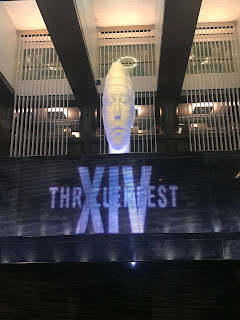 With so much to choose from, I decided to start with Pitchfest. It gives authors a chance to meet and pitch to literary agents actively seeking new clients. I made the wise decision to attend the practice session beginning an hour before the main event. Up until then, I thought I had done enough breathing exercises and preparation to stay calm and cool. Nope. When the doors opened and I walked in, the reality of the situation hit me—this could be the chance I’d been waiting for—the opportunity to capture an agent’s attention and interest that could alter my future writing career. Totally psyched myself out. What if they didn’t like me? They could crush my dreams within an allotted 3-minute session!
I walked shakily up to my first resident expert. I had gotten there early enough that I was first in line. I had chosen to talk to Elena Hartwell—a successful author with several books out, including a new one with Crooked Lane Books, one of my dream publishers. One look at me and she could see I was a ball of nerves. I sat down with her and she immediately reminded me that this was a practice session and not the real deal. She told me to take a few breaths and deliver my pitch. My shaky voice began with much less confidence and surety than I’d had just an hour earlier when talking to the mirror in my hotel room. I forgot some words, stumbled upon others, and began to sweat profusely. Luckily for me, Elena was kind and understanding. She began with what she liked—my story sounded fun and interesting. Then she went into her thoughts of how to improve—use comparative books to give the agent a feel for what I was aiming for, tell them my sub-genre upfront, and focus more on my protagonist. Good suggestions that made sense. Before heading off, she wished me luck. 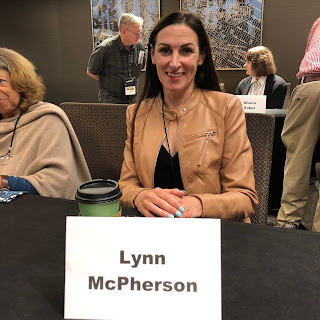 My second attempt was even less polished. I’d tried to incorporate what Elena had said and no longer had a memorized pitch. Luckily, Gretchen Stelter, an editor whose worked on over 500 manuscripts, was patient and understanding. She told me that it is okay to be nervous. Not all authors are skilled presenters. She went over the basics of what I was trying to convey and helped me focus on the main ideas. It was extremely helpful.
From the practice session, we went right into the main event. Having gotten out a lot of my jitters, I went into Pitchfest a little calmer and with a better idea of what I was doing. I also reminded myself that these agents wanted to hear what I had to say—they were here to look for writers to represent. I knew the agents I wanted to talk to—there were about a dozen I thought might be a good fit for me. So off I went.
It was a rough start—the first agent wasn’t interested. Not even a little bit. However, by that time, I was a calmer. I left the experience unfazed. From there things looked up. I went on to talk to seven more agents. Six were interested. That doesn’t mean they were ready to sign me. But, each one asked me to submit my manuscript to them—either full or partial. A lot of them had specific suggestions to incorporate into my writing. Each one was focused and listening to what I had to say. The day whizzed by. By five o’clock, I left with a clearer picture of what I could do to make my manuscript stronger. 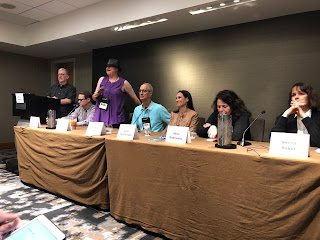 The next day, I was lucky enough to participate in a panel with fabulous authors and eager attendees. I did my panel and then went to several others. There were also cocktail parties and coffees meetups, where an array of accomplished authors, as well as other industry professionals, were walking around, happy to chat and mingle.
I took breaks to walk around the city. I attended a standup show at the Comedy Cellar in Greenwich Village. I took photos and ate some great food. 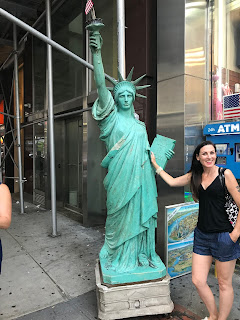 Overall, the conference was a success. I left with more focus, more energy, and a better sense of what I wanted to do in my writing. Before I submit my work, I am going to incorporate what I learned and do some serious revisions. You get one chance and I want to present the best manuscript I can. So, if you are looking to further your crime writing career and have some fun, start savings those pennies—Thrillerfest is worth it.

Lynn McPherson has worked for the Royal Canadian Mounted Police, ran a small business, and taught English across the globe. She has travelled the world solo where her daring spirit has led her to jump out of airplanes, dive with sharks, and learn she would never master a surfboard. She now channels her lifelong love of adventure and history into her writing, where she is free to go anywhere, anytime. Her cozy series has two books out: The Girls' Weekend Murder and The Girls Whispered Murder.

Posted by The Stiletto Gang at 3:20 AM