Woman's World has two weekly features: 5-minute romances and 2-minute mysteries. Mystery Writers of America lists Woman's World as one of its approved periodicals/webzines, which means that it meets "MWA's professional standards of good business practice and fair treatment of authors" and that stories published in Woman's World may qualify for Edgar Award consideration and applications for active MWA membership. 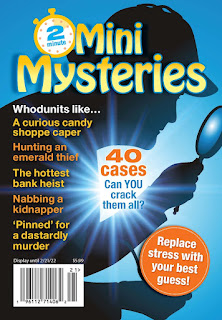 During the holiday season, Woman's World released anthologies of 40 romances and 40 mysteries. Available for $5.99, these compilations provide excellent sources to study the work Woman's World editors are likely to accept. 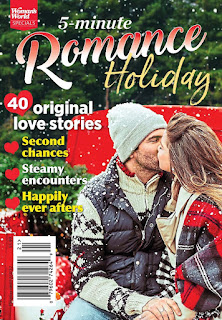 In addition to some delightful reading, each anthology has information about where to submit stories.

John Floyd, whose mini mysteries often appear in Woman's World, has provided tips for would-be submitters in his Sleuth Sayers posts A Woman's World Survival Guide and 100 and Counting. His fellow blogger, R.W. Lawton, whose short story "The Road to Hana" (Alfred Hitchcock Mystery Magazine) has been nominated for an Edgar, also wrote about the process in Writing for WW and Other Magazines.

Looking for a new experience this new year? Why not read these anthologies and submit your own story to Woman's World?

Posted by Paula Gail Benson at 1:30 AM