Gay Yellen: Cruella and Me

Two fictional characters are making me crazy. One's a famous villain, the other, a hero, and lately, they've pulled a switcheroo.

Cruella de Vil, the nefarious puppy kidnapper of Dodie Smith's novel, The Hundred and One Dalmations, is the villain. Ever-popular, her story has been made and remade into film at least four times. And she's invaded my writing life twice. 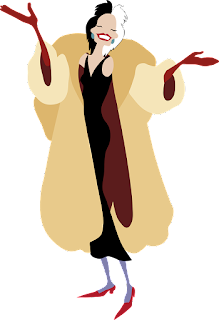 In 2014, a magazine reviewer called my antagonist in The Body Business "the Cruella de Vil of the year, the kind of villain you just love to hate." The description was perfect, though I hadn't thought about Cruella when I created my own greedy vixen.

That same year, I was asked to name the actor I'd cast as the hero of my book, Samantha Newman, a determined young woman with grit and a fair sense of justice. After Emma Stone's quirky performance in “Easy A,” I chose her, partly for her physical features, but mostly for her sense of comedy which, like Samantha's, is tinged with an interesting blend of snark and genuine heart. Fast forward to today, and imagine my surprise to discover that Emma, my Samantha of choice, is now starring as Cruella in a new Disney release. Presto change-o, hero becomes villain, and I have mental whiplash.
It helps me a bit to know that Samantha is somewhat of a mischief-maker herself. And Stone is a terrific actress. I'm hoping she's great in the part. The reviews have been mixed, but I'm a fan, so I'll watch the film and decide for myself— as soon as I get over the shock.
Truth is, we all have a combination of hero and villain inside us. For some, it's a daily struggle. But as long as we keep our good guys real and consign our bad guys to make-believe, I think we'll be okay.
P.S. If you know Emma, please tell her there's a film franchise just waiting for her to make it happen. This author would be eternally grateful.😊

Have you ever cast a favorite actor as the hero in a book?

Gay Yellen writes the award-winning Samantha Newman Mysteries. Gay would love to hear from you, here, on Facebook, BookBub, or via her website.