- Today I share a short-short story while I'm finishing up my newest novel. I hope you have a fantastic September and all those in school have a lovely experience this year. My son's currently a high school senior and taking virtual high school and college courses.

I ducked into the alley and squared my shoulders. I didn't trip on the cobblestones, even though I wore three-inch stiletto heels that had hurt my ankles and made the balls of my feet sweat. I didn't watch my steps closely either, I never looked down. I gazed straight ahead, head held high, shoulders back and down away from my ears, not hunched over and tilted sideways due to the heft of my tote bag stuffed with notebooks, journals, novels, and dreams.

I ran my right palm across the centuries-old brick lining the alley instead of pounding my fist into it. I didn't turn my head when I heard steps gathering speed at my rear. My heart didn't clinch as the man's baritone rumble evoked a soft laugh from a woman's throat. My chest didn't seize, my pulse stayed steady, my palms might have become damp and caught slightly on the bricks, but I charged on. 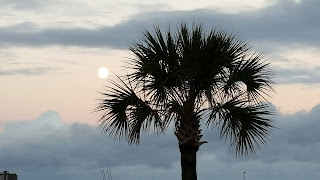 I liked the swish of the fringe of my silk purse brushing my thigh as it swung on my left wrist. I did hold my hands up to admire the shell pink of my nails that I hadn't bitten to the quick in two weeks. Fourteen entire days!

As I closed in on my destination, I didn't think my ample bosom, as my mother described it when she'd zipped up my sheath dress, pressed too tightly against the seams. I could breathe and still had a gap between the cleavage, even though fifteen pounds had crept up on me and I'm not a college freshman.

I didn't try to open the door first when the gentleman in the laughing couple rushed to grab the handle. I smiled at him instead and thanked him, surprised that my voice didn't quiver or shake but sounded gentle and southern to my ears and inside my head.

I didn't stop at the host station to ask for a table for one, or dash into the ladies room to throw up or give myself a final pep talk. I continued my journey directly into the well-lit bar.

It didn't take long for me to spot him. Dark hair glistening, the back of his neck newly shaved and begging for a kiss. He ran his finger around his starched collar, and then straightened his tie. I could almost catch a whiff of his aftershave, a musky, manly scent that had lingered on my porch swing cushion for hours after he'd left the evening before.

He thanked the bartender, paid a generous tip, and glanced toward the door. His smile spread across his face, causing wrinkles around his eyes. I enjoyed the long, silent whistle, the nod of appreciation, the way his body leaned toward mine. I reached him in five steps. Watching him, watching me. I had control. I had hope. I took the chardonnay glass from his hand, a shock of electricity coursing through us so violently it made the laughing couple stop and stare.

I didn't care. After the ultimate ten year dating dry patch, I wasn't looking back.

Robin Hillyer-Miles is close to finishing her next novel, "Cathy's Corner" and she can't wait to share it with the world. She lives in the South Carolina Lowcountry with her husband, son, and three dogs. Robin works for the YWCA Greater Charleston with the mission to eliminate racism and empower women. She's currently published with a short story in an anthology that's soon no longer going to be available to purchase.

Robin's also a certified tour guide for the city of Charleston, has 300 hours of yoga instructor training, and is currently super tired of hearing/seeing political ads (and it's only September!). :D

Keep in touch with her via her Facebook page at https://www.facebook.com/RobinHillyerMilesAuthorTourGuideYoga

Posted by Robin Hillyer Miles at 8:17 AM