In with the new, out with the old

But … a memorable personal event. (Personal, versus of world import, namely the end of the Vietnam War). Following up on my non-NY's resolution to clean out 3 boxes of old manuscripts, I found the prologue to the first novel I ever composed directly on a typewriter.

An artifact, I know. An IBM Selectric, to be specific. (Affordable only because my husband worked for IBM and got a discount).

Before that momentous undertaking, I'd written thousands of words in cursive and then transcribed the manuscript to a typewriter.

That prologue, six typed pages, lay on top of eight legal pads with the story handwritten on the front and back pages. With no margins.

What amazed me—more than how bad the historical romance sucked—was how legible my handwriting was. I'd once taught adolescent boys and often wrote on another artifact—the blackboard (green, in my school). I also wrote in a diary and kept legible notes on my daily planner.

Today, my longhand is worse than when I copied that first Palmer cursive letter in early third grade. My keyboard skills, on the other hand, have increased my manuscript output to a level of proficiency and efficiency I'd never have achieved writing by hand.

Still, I miss placing pen to paper and producing elegant handwriting. (I possess zero visual artistic talent, but I am in awe of beautiful penmanship). Sometimes, when I am at an impasse at my keyboard, I take out an array of pens and free write until the Muse comes back from her break.

Or until my fingers cramp.

Embracing my Luddite heart, I did a little research. Is cursive still taught in elementary schools? If so, what has replaced the Palmer method? Is printing easier to learn than script?

As with so many forays into cyberspace, I had to stop "researching" and resume pounding the keyboard. But the handwriting is on the wall …

"As we have done with the abacus and the slide rule, it is time to retire the teaching of cursive." (Morgan Polikoff, Asst Prof of the University of Southern California's Rossier School of Education, May 2013, New York Times).

In other words, in with the new, out with the old.

What about you? Do you write or print notes on paper? Or do you prefer to text?

*** AB Plum, aka Barbara Plum, lives, works, and plays without an abacus or slide rule in Silicon Valley. Her next book, Through Rose-Colored Glasses, scheduled for release on February 17, is the second book in the Ryn Davis Mystery Series. 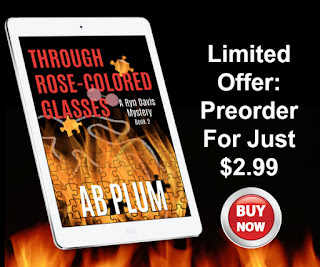