So Long, Farewell...but not Good-Bye

It's been a couple of years since I joined The Stiletto Gang, thanks to Debra Goldstein's efforts to recruit me at Bouchercon Toronto in 2017. While I've had an absolute blast, I'm at the point in my life where something has to give, at least if I want to keep writing books (I do).

The turning point came in June 2019, when I was elected as Vice Chair of Crime Writers of Canada. I'd been on the CWC Board since 2017, first as a Regional Rep for Toronto/Southwestern Ontario, and then as a Director for the Region, but the appointment of Vice Chair added an entirely new layer of responsibility, and the role of Chair for the 2020-21 fiscal year (eff. June 2020) will demand even more of my time and energy. Fingers and toes crossed that I do a good job for a great organization and its many fabulous members.

After careful consideration, I handed in my Stiletto Gang "blogging notice" in October. As such, this will be my final "First Monday of the Month" post, though I hope to return as a guest in future (hopefully with news to share about Book 3 Glass Dolphin, which I wrote about last month in my Do You NaNoWriMo post). In the meantime, you can always find me at www.judypenzsheluk.com and on Goodreads.

Until our paths cross again, 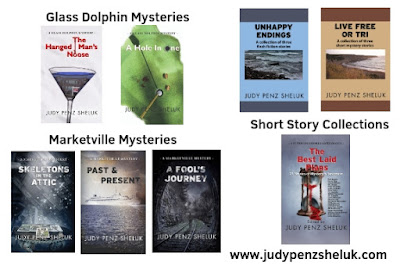 Posted by The Stiletto Gang at 4:30 AM