Failing the DHG Challenge, or Did I? by Debra H. Goldstein


In my October 11, 2019 blog post, I wrote: “I’m making a conscious decision to stop and announce, “Not me, anymore.” I’m going to go back to making time for myself – whether exercising, reading, or hanging out on the couch, I’m taking back a few hours for myself. Will you join me?”


Later in the blog, I asked people to comment or write what they planned to do and how they were doing on the challenge. Initially, the response was positive. Most people were going to make more time for reading. One said exercise and a few can best be described as making time to veg. Did they succeed? I don’t know because very few wrote again after their first or second responses. What I do know is how I succeeded.


I failed in that I only exercised twice, read four books and didn’t hang out that much on my couch 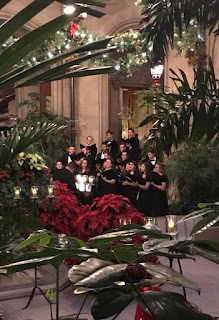 (maybe I did succeed at that one when I was home). What I did do was more PR than I want to think about for Two Bites Too Many during its launch weeks; visited my sister, nieces, and new grandniece in California when I added a few days to attending the Kensington cozy cons in Redondo Beach and San Diego; hosted the entire family for the weekend when we blessed my newest grandchild in temple; spent a week in Dallas at Bouchercon; sadly said good-bye to a younger friend who died unexpectedly; held other friends close having been reminded of how valuable my friend “sisters” are; and joined friends at the Biltmore estate to see what the house looked like lit for Christmas (a bucket list item). All in all, I was a very busy lady.


And you know what, I may have failed some aspects of the DHG Challenge, but I lived every moment of the past two months and realized the importance of sometimes sacrificing “me time.” I also understood that there were times I needed to make for myself – and I did. That balance for me is the key to mental and physical health.


So, maybe I did pass the DHG Challenge.