The first thing most people say to me when they learn I was a career cop is, “Oh. You don’t look like a policeman.”

This is a good thing because I’m a woman.

Perhaps at 5’3”, I don’t fit the stereotype in their minds. That’s not worrisome to my self-image because during my 20+ years in the Birmingham Police Department, it never occurred to me that I was too small . . . other than the annoying fact that my hands couldn’t fit properly around a gun. Not only did I have to figure out an alternate way to shoot, there were other challenges. In those early Academy days, we had to carry the fifty bullets needed for the firearms qualification tests in our pants pocket and dig them out to reload with one hand (the other held the gun). Tight time constraints for firing and reloading were in place to try to replicate some of the stress of being under fire.

If I pulled more than six bullets at a time out of my pocket, it overwhelmed my small hand’s capacity to manipulate them into position to reload. Bullets tumbled to the ground, making it impossible to reload in time. With practice, I developed the ability to blindly grab exactly six bullets at a time. I’m still proud of that skill, though I’ve yet to find a good use for it.

Since Joseph Wambaugh’s controversial Choir Boys appeared in 1975, the number of law enforcement authors has grown, but they’re still an anomaly, and so I get to surprise with the double whammy of being a retired cop and a writer. I’ve learned to deal with the “You don’t look like a policeman,” reaction with a smile and a simple, “Thank you.” And when I explain my latest novel is about a young police woman in Birmingham, Alabama who discovers she’s a witch, I get an even more fun reaction—“Is it autobiographical?”

Seriously, yes, I get this.  At first, I was too stunned by the question to respond, but now, I immediately shoot back with a straight face, “Totally.”

Even though I don’t claim to be a witch, I did pull on my police background to give authenticity to the story. Challenges lurked, even so. It has been a while since I wore blue, so I had to update department polices and equipment to those of current day, such as putting a body camera on my patrol officers and computers in the cars, but these were minor items. The most critical element was attitude, knowing how people in law enforcement who risk their lives on a daily basis think and react. That said, I certainly don’t espouse writing only “what you know” in that sense. If I did, I’d have a problem dabbling a little magic in with murder and mayhem!

My character, Rose Brighton, is a police officer in the city of Birmingham, Alabama. She’s taller than I am and has no problem holding a gun properly, but Rose has other challenges. Her first clue that her life is about to get complicated comes when she’s chasing a suspect down an alley and he appears to divide into two men, the real suspect, frozen in time, and a shadow version with a gun. From here things go south. She shoots a man in the back, the nightmare of every cop, and can’t explain what really happened. Unraveling that and the mystery of who she really is becomes a high-stakes struggle for survival. 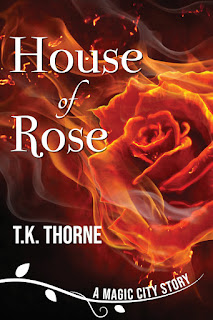 Weaving magic “realistically” into a crime story was a bit like learning to pull exactly six from a pocket full of bullets.  It seemed improbable at first, but maybe learning that skill was not such worthless endeavor after all. Maybe it was a reminder that anything is possible.