It's a Small World

Recently, I had the privilege of being a panelist at Murder in the Magic City (Birmingham, Alabama) and Murder on the Menu (Wetumpka, Alabama). Both are excellent small regional mystery events. 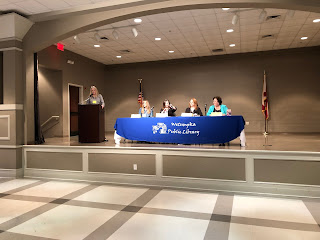 Murder in the Magic City, spearheaded by author Margaret Fenton, is held at the Homewood Public Library each year on a Saturday in February. It usually draws about one hundred attendees (the capacity of the room) to hear two keynote speakers and three to four panels of other authors. This 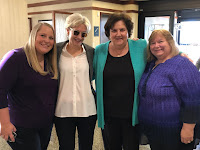 
On Sunday, the entire group of authors caravanned to Wetumpka for the F.O.W.L. fundraising luncheon, Murder on the Menu. F.O.W.L, the sponsor, is an acronym for Friends of the Wetumpka Library. Held in Wetumpka’s Civic Center, it is a joy for the authors – not only were we served a delicious lunch began, but again we had an audience who were delighted to interact with us at their lunch tables and to listen to our panels. Of course, the most entertaining panel was Lee Goldberg and Sue Ann Jaffarian. As we learned, they often have been featured together and their wit, humor and genuine respect for each other was evident. 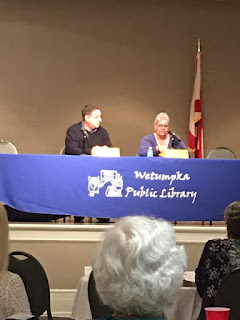 During the weekend, the authors had an opportunity to get to know each other. I personally found Sue Ann Jaffarian’s personal story to be the most interesting. Not only is she an acclaimed author, but since retiring after forty years as a paralegal, she has been traveling the country in Novella, an RV. She records her journey on Facebook, bi-monthly on Babble ‘n Blog and through a nightly blog or journal entry she posts at https://www.patreon.com/Sueannjaffarian.  This latter blog is followed by many, including fellow RV lovers.
That’s where the small world comes in.  While I was at the conference, I received an e-mail from a friend asking if I’d met Sue Ann and what she was like. My reply was “yes” and “lovely.” My friend, who owns the same kind of RV as Sue Ann (disclaimer: my friend lives in a house most of the time unlike Sue Ann), explained that she follows Sue Ann’s nightly blog and that she is a huge fan.
I shared the e-mails with Sue Ann, who immediately checked and saw they were online friends. That evening, in her blog post, Sue Ann gave a shout-out to the weekend and my friend, by name, observing what a small world it is. I agree. 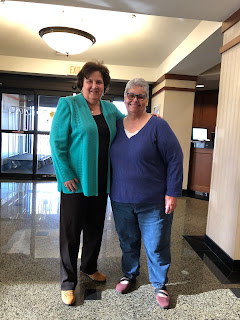