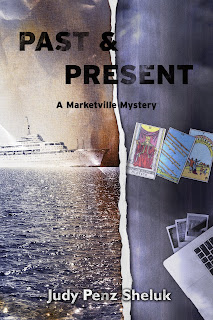 Judy Penz Sheluk reporting in with news of my latest book and an ARC Giveaway!

I'm beyond excited to announce that Past & Present, the second book in my Marketville Mystery series, is now available for pre-order on Amazon for the special introductory price of $2.99. This is the sequel to Skeletons in the Attic, which actually reached #1 on Kindle and stayed on Amazon's Top 100 for the first 30 days after release in three categories (of course I took a screenshot). 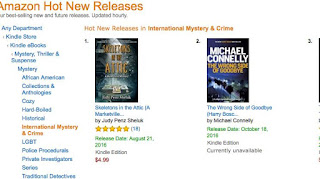 In Past & Present, protagonist Callie Barnstable starts her own business in Marketville: Past & Present Investigations. Here's a bit about it:


Sometimes the past reaches out to the present...It’s been thirteen months since Calamity (Callie) Barnstable inherited a house in Marketville under the condition that she search for the person who murdered her mother thirty years earlier. She solves the mystery, but what next? Unemployment? Another nine-to-five job in Toronto?

Callie decides to set down roots in Marketville, take the skills and knowledge she acquired over the past year, and start her own business: Past & Present Investigations.

It’s not long before Callie and her new business partner, best friend Chantelle Marchand, get their first client: a woman who wants to find out everything she can about her grandmother, Anneliese Prei, and how she came to a “bad end” in 1956. It sounds like a perfect first assignment. Except for one thing: Anneliese’s past winds its way into Callie’s present, and not in a manner anyone—least of all Callie—could have predicted.

Early reviews from Advance Reader Copies (ARCs) have been terrific. Our very own Stiletto Gang member Debra Goldstein said, "A well-crafted story that keeps readers engages as history blends into the present."

While every story I write holds a special meaning for me, Past & Present is especially meaningful. The release date of September 21, 2018 is also the second anniversary of my mother, Anneliese Penz's, death. It's a bittersweet memory to know that the last book she read was Skeletons in the Attic, the first book in the series. But it's more than that--my mom left behind a small suitcase filled with immigration papers, passports, and photographs, among others; documents I had never seen. They formed the basis for the book, and subsequently helped to frame Callie's investigation into the past.

My mom was so pleased that I dedicated Skeletons in the Attic to my father, Anton Penz, who died many years ago of stomach cancer at the age of forty-two. Of course, there's a very important Anton in Past & Present. I like to think they're together again, watching my journey, and encouraging me every step of the way. LEAVE A COMMENT for a chance to WIN a Kindle ARC of Past & Present. The winner will be selected on Friday, August 10th.

Pre-order here (and thank you!)
Posted by The Stiletto Gang at 4:00 AM