What a true pleasure to host the 2018 Anthony nominees for best short story! Here for your reading pleasure is the list with links to each story. [Please note: You’ll need to scroll down at some of the links below to get to the stories.]

“God’s Gonna Cut You Down” by Jen Conley, Just to Watch Them Die: Crime Fiction Inspired by the Songs of Johnny Cash: https://www.jenconley.net/

“My Side of the Matter” by Hilary Davidson, Killing Malmon:

“Whose Wine Is it Anyway” by Barb Goffman, 50 Shades of Cabernet:

Thank you to the nominees, Susanna Calkins, Jen Conley, Hilary Davidson, Barb Goffman, Debra H. Goldstein, and Art Taylor, for taking the time to answer a few questions and share their nominated stories!

(1) Where and when does your nominated story take place?

Susanna Calkins: “The Trial of Madame Pelletier” is set in Tulle, a town in central France, in 1840. It focuses on the court trial of a “Lady Poisoner,” a woman accused of killing her estranged husband with rat-paste and truffles.

﻿﻿
Hilary Davidson: “My Side of the Matter” is set in and around Minneapolis. I’ve only had the pleasure of visiting that city once, but I felt compelled to set the story there because the story is part of the KILLING MALMON anthology — and Dan and Kate Malmon live in that area.

Barb Goffman: “Whose Wine Is It Anyway?” takes place in the litigation department of a large Washington, DC, law firm. I don’t specify when the story takes place. I expect the reader will assume it is a contemporary story.

﻿
﻿﻿﻿﻿
Debra H. Goldstein: “The Night They Burned Ms. Dixie’s Place” is set in Birmingham, Alabama in the 1960’s, in a house where they change the sheets more than once a night. The story reflects Birmingham’s racial, civil, and political strife and their impact on a particular night on a boy coming of age.

Art Taylor: “A Necessary Ingredient” was published in Coast to Coast: Private Eyes from Sea to Shining Sea, which covers (as that subtitle suggests) a pretty wide geographical area. I was assigned my home state of North Carolina, and instead of choosing an actual town, I created a fictional one, a mid-sized Southern town drawing on several places I’ve lived or known in Eastern North Carolina—Goldsboro, Kinston, and Richlands, among them. The story takes place loosely in the present, but the main character, Ambrose Thornton, has immersed himself in some ways, in a mythical past—the world of the hard-boiled detective stories he lives to read—and the present of this small town is also steeped at bit in some of that atmosphere, if only because of Ambrose’s own perspectives driving the story.

(2) What was the biggest challenge you encountered in writing your nominated story?

Susanna Calkins: I adapted this story from a real poisoning case that I had read about when I was working on my doctorate in history. At the time I had focused on the media accounts of the case, which were all in French, because I loved the notion of the woman being on trial in the court of public opinion as well as in the courtroom. Unfortunately, I had not kept my notes, so I had to go back to the original source materials, only to realize that my reading knowledge of French has considerably diminished over the last twenty years. Fortunately, I found a very detailed contemporary description of the trial in a British medical journal, in which the authors—both physicians—focused on the details of the poisoning and the forensics they were able to use. Except for a few interesting details, I completely changed the story, the characters, and of course provided a twist...

Jen Conley: The biggest challenge for me was writing a first-person male character. This choice can be difficult to establish when you’re the opposite gender. Readers see the name “Jen Conley” and assume the first-person narrator is female. It’s just natural for any reader to do--assume the first-person narrator is the gender of the writer. I must’ve re-written the first few lines of the story about twenty times. I also found it challenging to create empathy for a murderer, especially a murderer who killed my main character’s sister in a horrific and vile way.

Hilary Davidson: The premise of KILLING MALMON was that Dan Malmon had to die in every story. (Before you decide that we’re terrible people to do that to such a nice guy, you should know that Dan was co-editor of the project, and it raises money to benefit the National Multiple Sclerosis Society.) After I got over the idea of “killing” my friend in print, I realized that the biggest challenge was building suspense when the reader already knew that Dan was going to die. How do you keep the reader intrigued when they know what’s going to happen? I solved that by turning the story on its head, so that the man who killed Dan — and got away with it — suddenly starts writing a confession. The suspense builds around what led him to commit the crime, and the mysterious reason he needs to reveal the truth.

Barb Goffman: Plotting. Plotting is often a big challenge for me. I’d been asked to submit a story to 50 Shades of Cabernet, so I knew my plot had to involve mystery and wine. Consequently I did a lot of wine research, hoping to come across an idea that awakened my muse. I can hear the “research” jokes now, but my muse isn’t a drinker. I learned there’s a spa in Japan that uses red wine in its hot tubs. I thought for sure I’d get a plot out of that, but no. I also learned about festivals celebrating wine and chocolate. Surely, you’d think I’d devise a plot from that. But no again. It wasn’t until I learned that people can be allergic to the sulfites in wine that things really started clicking. Thank goodness! 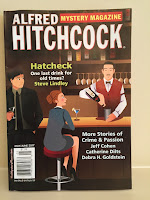 Debra H. Goldstein: The biggest challenge in writing “The Night They Burned Ms. Dixie’s Place,” was getting the voices right. Being a white Jewish Yankee middle-aged female, I knew I couldn’t call on my own experiences and dialect to bring to life a nine-year-old black male protagonist, his mother, and a southern madame. Each of these characters had to have a distinct personality and manner of speaking. They also had to reflect southern society in the 1960’s and, in the case of the child, both innocence and the way the world was changing. Consequently, it was important that none of these characters be written stereotypically.  Rather, each needed to be treated in a respectful manner which demonstrated their diversity to the reader. Although the crime is an important element of “The Night They Burned Ms. Dixie’s Place,” nailing the characters’ voices is what ultimately engages readers.

Art Taylor: Balancing that mix of small town and hard-boiled actually posed part of the challenge—but far from a surprise, it was a challenge that I took as central to what I was doing here. When my friend Paul D. Marks, the anthology’s co-editor, asked me to contribute, I almost didn’t do it. I haven’t really written many private eye stories—and none of the ones I’ve written have been “straight,” so to speak. But then I liked the idea of crossing the private eye story—traditionally hard-boiled—with the kinds of regional fiction that have inspired me in other cases. How can you draw on both effectively? What happens when those “mean streets” of Chandler’s famous quote are actually dirt roads dotted with roadside produce stands? And can the class struggles that so often drive hard-boiled fiction be found in equal measure in the hierarchies of proper Southern society? Well, that was a challenge I enjoyed stepping up to, and hope readers have enjoyed as well.

Here’s where you can learn more about these wonderful authors and their work. Best wishes to them all!

Susanna Calkins was born and raised in Philadelphia, and lives outside Chicago with her husband and two sons. Holding a PhD in history, Susanna writes the award-winning Lucy Campion historical mysteries as well as the forthcoming Speakeasy Murders, both from St. Martin’s Minotaur. MURDER KNOCKS TWICE, set in Prohibition-Era Chicago, will be out Spring 2019. “The Trial of Madame Pelletier,” her first published short story, appeared in Malice Domestic: Mystery Most Historical (Wayside Press, 2017). Read more about her work at http://www.susannacalkins.com/

Jen Conley’s short stories have appeared in Beat to a Pulp, Just To Watch Them Die: Crime Fiction Inspired by the Songs of Johnny Cash, Trouble in the Heartland: Crime Fiction Inspired by the Songs of Bruce Springsteen and many others. She has contributed to the Los Angeles Review of Books, has been shortlisted for Best American Mystery Stories and is one of the former editors at Shotgun Honey. Her Anthony Award nominated story collection, Cannibals: Stories from the Edge of the Pine Barrens, is available now. She lives in Brick, New Jersey. Check out her website at https://www.jenconley.net/

Hilary Davidson is the author of the Lily Moore series—which includes The Damage Done, The Next One to Fall, and Evil in All Its Disguises. She also the author of the standalone thriller Blood Always Tells and a short-story collection called The Black Widow Club. Her next novel, One Small Sacrifice, will be published by Thomas & Mercer in May 2019. Visit her online at http://www.hilarydavidson.com


Barb Goffman loves writing, reading, air conditioning, and her dog, not necessarily in that order. She’s won the Agatha, Macavity, and Silver Falchion awards for her short stories, and she’s been a finalist for national mystery short-story awards twenty-two times, including eleven times for the Agatha (a category record). Her book Don’t Get Mad, Get Even won the Silver Falchion for the best collection of 2013. Barb is thrilled to be a current Anthony and Macavity award finalist for her story “Whose Wine is it Anyway?” from the anthology 50 Shades of Cabernet.  She works as a freelance editor and proofreader and lives with her dog in Winchester, Virginia. Learn more at www.barbgoffman.com.


Agatha and Anthony nominated Judge Debra H. Goldstein’s is the author One Taste Too Many, the first of Kensington’s new Sarah Blair cozy mystery series. Her prior books include Should Have Played Poker and 2012 IPPY Award winning Maze in Blue. Debra’s short stories have appeared in numerous periodicals and anthologies including Alfred Hitchcock Mystery Magazine, Black Cat Mystery Magazine, and Mystery Weekly. She is president of Sisters in Crime’s Guppies, serves on SinC’s national board, and is vice-president of SEMWA. Find out more about her writings at www.DebraHGoldstein.com


Art Taylor is the author of On the Road with Del & Louise: A Novel in Stories, winner of the Agatha Award for Best First Novel. He has won three additional Agatha Awards, an Anthony Award, two Macavity Awards, and three consecutive Derringer Awards for his short fiction, and his work has appeared in Best American Mystery Stories. He also edited Murder Under the Oaks: Bouchercon Anthology 2015, winner of the Anthony Award for Best Anthology or Collection. He is an associate professor of English at George Mason University. Check out his website at http://www.arttaylorwriter.com/
Posted by Paula Gail Benson at 12:00 AM