Magic Moments for Readers and Writers 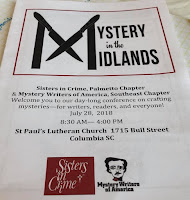 Magic Moments for Readers and Writers by Debra H. Goldstein
Sometimes a good thing only gets better. Last weekend, I was part of one of those perfect magic moments as a participant at Mystery in the Midlands

Let me tell you about how it came together.

A year ago, Jeffrey Deaver, as president of Mystery Writers of American (MWA) offered to cover his own expenses and put on workshops throughout the country. On behalf of SEMWA (the Southeast region), he came to Columbia, South Carolina. His program was such a success, that involved members of SEMWA and the Palmetto Chapter of Sisters of Crime hoped they could partner for another dynamic program. But how?

Perhaps it was divine providence, but they discovered Sisters in Crime had started a national speakers 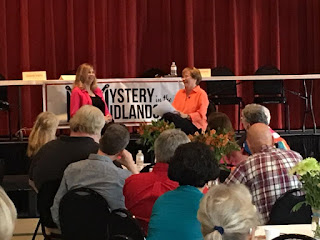 bureau program that permitted a chapter to apply for one of a finite number of grants which would sponsor designated speakers to come to the chapter for whatever type of program the chapter wanted. The SinC educational initiative, which was just starting, was designed to enable all SinC chapters access to writers and programs they would never be able to fund.

Fingers crossed, Palmetto’s leadership applied for a SinC grant and was awarded the opportunity to

have Elaine Viets come to Columbia. Rather than simply inviting local people to hear Elaine speak, Paula Gail Benson and Riley Miller put their heads together and decided to forge a partnership between the Palmetto Chapter of SinC and SEMWA to offer a mystery workshop for readers and writers headlined by Elaine, but which would also showcase other authors as panelists and master class teachers.

Because of Paula and Riley’s vision, what could have been a local affair, became Mystery in the Midlands, an event attended by eighty plus people from five different states. Besides Elaine, eighteen other authors were showcased amidst book sales, signings, and networking. Not only did the conference run smoothly, but a silent auction of books donated by the participating authors generated scholarship funds for three children to participate in My First Books SC, a statewide partnership affiliated with Dolly Parton’s Imagination Library. It provides books for registered children from birth to age five. 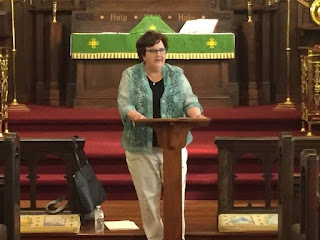 Mystery in the Midlands was held in Columbia’s beautiful St. Paul’s Lutheran Church. The church’s main fellowship hall was used for registration, refreshments, and the panel discussions, but the three master classes were held in the boardroom, choir room, and sanctuary. And yes, it was Jewish me, who was assigned to teach my master class on conflict under the stained windows depicting the Good Shepherd and other scenes from the Bible. Apparently, things went okay because I had a good audience and none of us was struck by lightning or any other disasters.
Participants left the day looking forward to next year’s Mystery in the Midlands. Amazing what magic a simple idea, good leaders, partnerships and enthusiasm can create. Will I see you there or 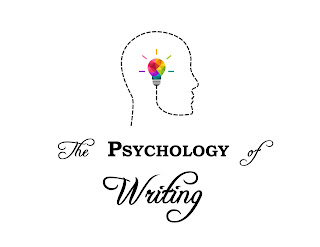 perhaps in Decatur, Georgia on October 6, when SEMWA and the Atlanta Chapter of SinC co-sponsor an all-day workshop on the Psychology of Writing featuring Toni L.P. Kelner – Leigh Perry, Dr. Stephen M. Kelner, and fifteen other authors?