Last weekend, I attended my first writers’ festival – the Local Authors Fair at the New London (CT) Public Library. To clarify, I attended for the first time as an author. I met lots of great folks, fellow authors, and dedicated librarians. And I learned the secret to sales at writers’ events: 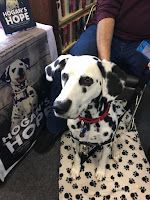 It’s been a month of firsts – my first novel, my first book signing, my first blog interviews. In each, I’ve had fun, but I know I’ve made rookie mistakes. For example, at the authors’ festival appearance I showed up with books. Just books. No cookies. No candy. No dog.

Bottom line? I sold two books. The author with the adorable dog? She had a constant line of buyers!

Don’t let this happen to you.

If you haven’t written an uplifting story of a dog that beats the odds, or don’t have an adorable dog to accompany you to events, here are some out of the box ideas for selling books at signings and fairs from my favorite writers, the Sisters in Crime of the Chesapeake Chapter.

Donna Andrews suggested that you have stuffed animals do the talking. During one Barnes and Noble group book signing, where customers either avoided making eye contact or asked the authors where to find the bathroom, Donna liberated some stuffed reptiles from the children’s department and used them to entice, er sorry, entisssse, customers to visit the authorssss. The result? The rest of the signing was a resounding successssss.

Other advice? Grace Topping said don’t sit down – remaining standing is more welcoming.
Alan Orloff said something about offering to wrestle an alligator, but then, that’s Alan Orloff. 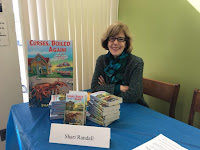 Do you have any advice for author events?

Shari Randall is the author of CURSES, BOILED AGAIN, the first of the new Lobster Shack Mystery series from St. Martin’s Press. At her next signing, she’ll be the one standing at the signing table with a basket of chocolates, fully clothed, thank you very much.
Posted by The Stiletto Gang at 12:00 AM