I am a know-it-all. This is not a confession I make likely, because being called a know-it-all when I was growing up was not a positive experience. 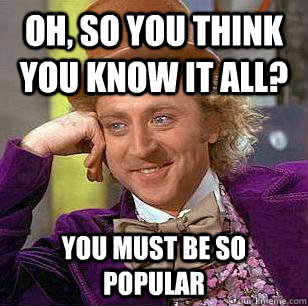 And yet, I couldn't help myself. I liked knowing things. I still like knowing things. It goes deeper than needing something to feel superior about (I know something you don't!). Knowing things was how I held on to an objective reality when my personal reality was constantly being challenged when I was growing up.

Feelings, I learned early on, lied. They did such a good job of lying they could rewrite the past, shape the present, and make the future seem like destiny. If things were good, they had always been good and would always be good. More often than not, if things were bad, they had always been bad and always would be bad. I needed something I could depend on to hold on to. And that's when I discovered facts -- things that were undeniably true. Things that surpassed emotions. Things that I could use as anchors so that my life could make some sort of sense. 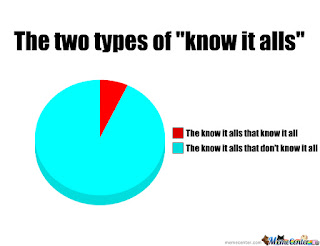 My hunger to know things, really know things, also meant a huge reluctance to accept that the things I knew were wrong. My family had invested in a set of encyclopedias when I was a child, and I went to them on a regular basis. These days I use the Internet to verify that I do in fact know what I know (and that it is knowable), using skills garnered in my years as a journalist to test sources and information. Fact-checking, once a part of my job as a reporter, has become part of my daily life. To this day, I go into an emotional tail spin if a fact I have held on to is questioned -- how could I get something wrong? What is actually knowable? Will life ever make sense?

It is with old-fashioned journalistic confidence -- the confidence of someone who has done the fact checking -- that I can say that when I know something, I know something. I have spent more time than is probably healthy looking it up and verifying its veracity, or else I will be light in my presentation of said fact, using "I think I read somewhere that..." instead of stating it as something actually true. Being a know-it-all is not something I take lightly -- I try very hard to accurately share what I know. 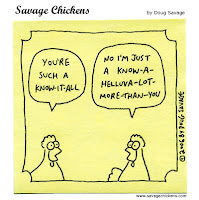 I have also had a lot of different jobs. In my years attempting to be a freelance journalist (which I was never great at because selling my writing was always harder than doing the writing), I took a lot of day jobs, and in fact, spent a great deal of time being a temporary employee. Being a temp suited me since I have always been able to learn fairly quickly, and because I like being helpful. And since I was a temp, there was only so much filing I would have to do before getting (or asking for) a new assignment. Eventually, I became one of those people who knew at least a little bit about a lot of different things. I was a generalist, in the old terminology.
So it greatly amused me when I found out that one of the methods I could study in social work was "advanced generalist." An advanced generalist social worker can work in multiple systems and at multiple levels, from direct services to policy. Advanced generalists are considered part of the mezzo or middle level of social workers (with strictly clinical social workers at the micro level, and those working on policy or high admin levels considered more macro level workers). As such they get training both in clinical work and in administrative work, learning how to diagnose individual clients as well as assess communities and organizations.

It matches my know-it-all spirit to be an advanced generalist. I have worked in various jobs in various fields, including journalism, public relations, marketing, administrative work, English and math tutoring, teaching, office management, case manager, social worker, and now, therapist. And I have learned a ton of different things both formally and informally (including that time I took a class called "acting for the nonprofessional" and that other time I learned how to waltz). In fact, lacking any other language to describe my particular brand of know-it-all-ness (I know at least a little bit about a really large number of subjects), I often refer to myself as an advanced generalist outside of the field of social work.

So I was very pleased to discover that my particular brand of know-it-all-ness is not something unique to me, and in fact has a (relatively) brand new name: multipotentialite. According to Wikipedia, In 1972, R.H. Frederickson described a multipotentialed person as people who:

“When provided with appropriate environments, can select and develop a number of competencies to a high level.”

Emilie Wapnick coined the term multipotentialite to help unite folks who fall under this general definition into a single community. Essentially, it's a fancy term for generalist, which Wapnick talks about in a TED Talk about why not everyone has "one true calling." Which would explain my multiple jobs, two distinct careers, and constant need to learn new things.

I have never been the best at anything, but I have managed to pull off "pretty darn good" in a lot of areas.

The only time I get use use all my know-it-all-ness -- without penalty -- is when I engage in writing, particularly creative writing. I suspect every author I know is in some way a multipotentialite, and certainly every one has done a ton of research on a variety of subjects (including various ways to kill people or cover up having killed someone). In a way, I think every creative writer is -- or is forced to become -- an advanced generalist.

Which puts a whole new spin on the old adage: "write what you know." If you don't know it, learn it, and then write about it. 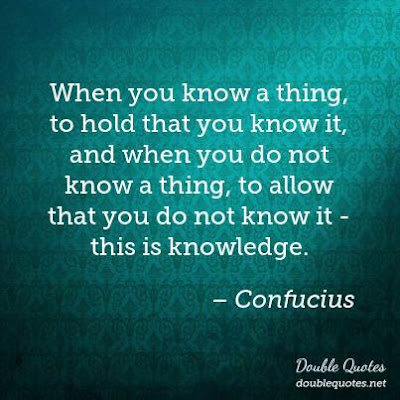 ***
J.M. Phillippe is the author of the novel Perfect Likeness, Aurora One and the short stories, The Sight and Plane Signals. She has lived in the deserts of California, the suburbs of Seattle, and the mad rush of New York City. She works as a clinical social worker in Brooklyn, New York and spends her free time binge-watching quality TV, drinking cider with amazing friends, and learning the art of radical self-acceptance, one day at a time.
Posted by J.M. Phillippe at 2:00 AM