TURNING TO OTHER WRITERS IN TIMES OF TROUBLE 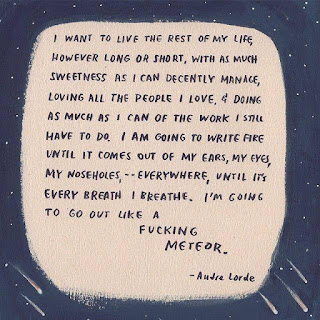 Right now, that world around us all is stressful, troubling, and even frightening. In these times of difficulty, I turn to the wisdom of other writers, and so today, I offer to all of us a collection of things that writers who came before us have said about this profession we all share.


“A house uncleaned is better than a life unlived.” – Rebecca West

“Exercise the writing muscle every day, even if it is only a letter, notes, a title list, a character sketch, a journal entry. Writers are like dancers, like athletes. Without that exercise, the muscles seize up.” – Jane Yolen

“Write all the time. Rework what you write. Hack it to pieces, cut and change. Writing is a self-conducted apprenticeship." – Martha Gellhorn

“Every new book is a challenge and requires different problem-solving for the characters.” – Phyllis A. Whitney

"I don't think you have time to waste not writing because you are afraid you won't be good at it." – Anne Lamott

"If I quit now I will soon go back to where I started. And when I started, I was desperate to get to where I am now." – Flannery O'Connor

“You may as well write what you want because there's no predicting what will sell.” – Judith Guest

“The most important thing about art is to work. Nothing else matters except sitting down every day and trying. ... This is the other secret that real artists know and wannabe writers don’t. When we sit down each day and do our work, power concentrates around us." – Steven Pressfield

“It's the writing that teaches you.” – Isaac Asimov

“There are no rules except those you create page by page.” –Stuart Wood

Linda Rodriguez's Plotting the Character-Driven Novel, based on her popular workshop, and The World Is One Place: Native American Poets Visit the Middle East, an anthology she co-edited, are her newest books. Dark Sister: Poems will be published in February, 2018. Every Family Doubt, her fourth mystery novel featuring Cherokee campus police chief, Skeet Bannion, will appear in August, 2018, and Revising the Character-Driven Novel will be published in November, 2018. Her three earlier Skeet novels—Every Hidden Fear, Every Broken Trust, and Every Last Secret—and her books of poetry—Skin Hunger and Heart's Migration—have received critical recognition and awards, such as St. Martin's Press/Malice Domestic Best First Novel, International Latino Book Award, Latina Book Club Best Book of 2014, Midwest Voices & Visions, Elvira Cordero Cisneros Award, Thorpe Menn Award, and Ragdale and Macondo fellowships. Her short story, “The Good Neighbor,” published in the anthology, Kansas City Noir, has been optioned for film.