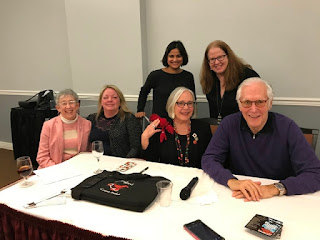 Each panelist was introduced with a recap on how they became involved and the one key factor that played in most was “the bar.” So, if you want to become part of the inner workings of these mystery conferences, head to the bar.

Then during the next 30 minutes the audience got to hear about each: Malice and Bouchercon are reader/fan conventions while New England Crime Bake and ThrillerFest are writer’s conferences.

Bouchercon is the only one of this group where the location varies each year. This year, the conference is being held in St. Petersburg, Florida, while New England Crime Bake is in Boston, ThrillerFest is in New York City and Malice Domestic is in Bethesda, Maryland.

At the fan conventions you get to mingle with authors and other readers; you attend panels and have a cornucopia of activities for your choosing. Same holds true for writer’s conferences as well as learning more about the craft of writing.

To be on a panel at Malice and Bouchercon, you have to check the box when filling out your registration. At New England Crime Bake, authors are invited to be on a panel and at ThrillerFest, they try to accommodate all authors attending.

In terms of sizes, Bouchercon is the largest with 1,500 attendees, followed by ThrillerFest with 800; Malice at 600 and New England Crime Bake at 300. All numbers are approximate.

All in all, it was a good talk and gave me more clarifications between these four conferences which I was lucky to have attended.

What conferences have you attended in the past? Are you going to any this year? I am and I look forward to seeing you there.