Recently, I was going over the edits from a beta reader on my forthcoming mystery novel - Against the Undertow (sequel to An Unseen Current). I was excited to read over the notes because the reader had been pretty enthusiastic verbally about the book and I was looking forward to easy edits (for once).  Beta readers usually give critiques on story elements, spot plot holes, and generally let an author know if something is working or not. They can do line edits and spot typos, but frequently that’s a separate gig because the mental focus for each job is quite different. Because of that, I usually tell my beta readers to treat typos like terrorists on the train in New York – if you see something, say something – but don’t go looking for them. Which is why I laughed when I got to this note:

I didn’t take note of typos except for one I thought I’d mention: on p. 76 you meant perennial and instead wrote perineal.

That is indeed a typo worth mentioning and I promptly laughed and shared it with about eight people. But it got me to thinking about some of my other slips of the fingers. Here’s a couple that I thought worth noting.

He knew he would get some carp for it. Yes, because fish are often given as a sign of disapproval.

Stalking feet. Because he has those feet that just will not stop violating restraining orders.

I’m going as troll. Many problems here. Including missing the word “for” and a misplaced space around the S. But if you want to go for a stroll as a troll, apparently I will let you. Gotta look out for those trolls.

Desserted is not, repeat not, the same as deserted. I wish it was. I wish I could be desserted ALL the time. But cake is not a healthy breakfast choice.

As I continue to write, I’m sure I will make many more typos. I hope that at least a few are as good these ones. What about you? Have you spotted any awesome typos lately? 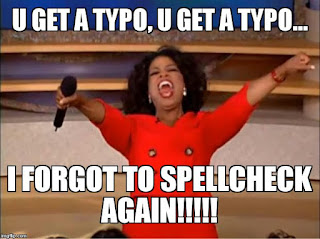 Bethany Maines is the author of the Carrie Mae Mystery Series, Tales From the City of Destiny, San Juan Islands Mysteries, Shark Santoyo Crime Series, and numerous short stories. When she's not traveling to exotic lands, or kicking some serious butt with her fourth degree black belt in karate, she can be found chasing her daughter or glued to the computer working on her next novel. You can also view the Carrie Mae YouTube video or catch up with her on Twitter and Facebook.