Love at first sight. It happens. It happened to me. I fell in love with New Orleans almost as soon as the plane landed at Louis Armstrong Airport. I fell in love the moment I spotted someone walking through the terminal with a hurricane.

Then came Jackson Square and Royal Street and the food and the Garden District and Audubon Park. Then came beignets at Café du Monde and shopping on Magazine Street. Then came the busker, who upon learning I was from Kansas City, effortlessly shifted the style of jazz he played to make me feel at home. Anyone would be head over heels…

New Orleans charmed me. It’s good at that. But even I, in the throes of falling in love, could see there were problems. New Orleans is a southern lady of a certain age, still lovely, but her slip is showing, and there’s a run in her stocking, and it’s possible she’s had one too many Pimm’s cups. She’s a character.

Perhaps that’s why I wrote two books about her.

The second book, Bayou Nights released this July. I had the opportunity to research everything from Jean Lafitte’s pirate crew to Absinthe House. Obviously, first-hand research is the best! I penned lines at the Hotel Monteleone, tasted beignets at Café du Monde (because what’s a trip to NOLA without them?), meandered down Pirates Alley, and studied the altar at St. Louis Cathedral.

One reviewer noted, “I absolutely love how Mulhern brings the richly atmospheric world of 1903 New Orleans to life in this tale. The world draws you in from the start and you feel like you’re walking alongside Christine and Drake as they encounter the most incredibly vibrant spirits, both living and dead.” I’ll cherish those words because I want everyone who reads Bayou Nights to fall as in love with New Orleans as I am.

That said, a city is not a plot. I needed one. One filled with mystery and atmosphere. I also needed characters. I created Drake, a man who does not fall in love with New Orleans on sight. Drake sees the city's slip showing, the run in the stocking…he complains about the humidity and life’s languid pace. Yet, slowly, he is seduced. As he comes to understand New Orleans, he falls in love with the heroine, Christine Lambert, a woman as complicated as the city where she lives.

Because I’d researched pirates, I needed a swashbuckling plot—one filled with lost treasure, voodoo, and danger.

The result is my love letter to New Orleans. Even if you’ve not yet been to the Crescent City, I hope you fall in love too! 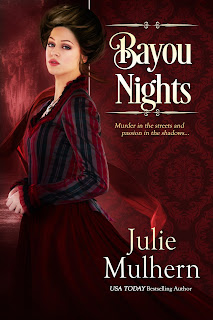