Sometimes a Writer Has to Dredge Up a Fearsome Memory 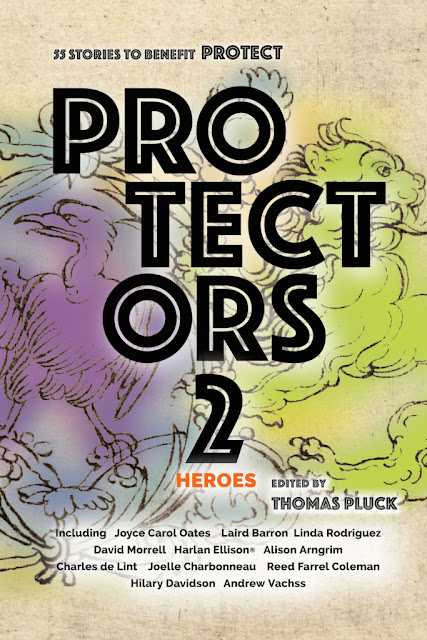 Recently, I was invited to participate in an anthology of short fiction to benefit a cause I truly believe in—PROTECT, The National Association to Protect Children, a wonderful organization that works to change the laws of this country to give more protection from abuse and sexual predators to children.  http://www.protect.org/


In Protectors 2: Heroes, the stories were all to be about someone protecting a child or someone vulnerable. I knew immediately what my story had to be. I just didn’t know if I could write it.


When I was still a teenager back in the 1960s, I had lied about my age to get a job as a juvenile justice officer (read: housemother) working with young girls who had been remanded to custody. I saw and did a lot of things during that time, but there was one incident that had been branded into my memory. I foolhardily responded to a call for help from one of our released girls and put myself into as much or more danger as she was in when she called. If not for a strange elderly man who helped us, I have no doubt that neither of us would have survived.


This was the story I wanted to tell for Protectors 2: Heroes, but I had never learned who this man was or why he had come to my aid or how he had been able to help me. So it seemed very unbelievable. Truth is often stranger than fiction, but if you write it as it happened, it won’t work as fiction because of that very incredible strangeness. So I gave the story a supernatural twist, and “Mr. Nance” was created, based solidly in a real situation with details I had never been able to forget.


Protectors 2: Heroes is out now and available for purchase at http://www.protectorsbooks.org/protectors-2-heroes/


I’m in great company among the other 58 contributors, and to my surprise, I’m one of the writers featured on the cover, along with Joyce Carol Oates, Charles de Lint, Harlan Ellison, David Morrell, Reed Farrell Coleman, Joelle Charbonneau,  and Hilary Davidson, as well as Andrew Vachss, one of the founders of PROTECT.


So, here’s a taste of my story, and I hope it will entice you to check out the anthology and perhaps buy it to benefit this great cause.

It was just my luck that I took the phone call right as I was leaving work that hot summer Saturday evening in 1968. If it had been three minutes later, someone else would have picked up the phone, someone like Naomi, who would have just said, “Sorry, no can do,” and gone back to reading Blazing Hearts after hanging up and writing down the call for her shift report. As Naomi was fond of telling me, she had common sense, which was not so common anymore.


“Bright Hill School for Wayward Girls,” I answered. “Sofia Noguera speaking.” I hoped it was a wrong number, and I could finish making my getaway. My roommate Kathy had already headed out to the car and would be waiting impatiently for me, so we could head back into the city and probably go to one or more of several parties friends were throwing.


“Sofia, it’s Chantay.” In the background behind her childish voice, I could hear someone yelling and pounding. Not that unusual for a Saturday night where she was. Chantay was an eleven-year-old former inmate at Bright Hill, who lived with a heroin-addicted hooker mother in the projects. “You gotta help me.” She started sobbing. “Mom and a guy are nodded off in the bedroom, and another guy’s wanting to come in and screw her. I told him she was out, and now he wants to come in and do me instead. He’s big, real big, Sofia. And mean. He’ll hurt me bad. I know it.”


“I’m in the apartment. I locked the door on him and put the burglar bar up. But he’s all drunk and really going at that door. I don’t think it’ll hold. You got to come get me and take me back to Bright Hill.”


Sad that what was essentially juvey jail looked better and safer to her than home, but that wasn’t unusual with our girls. I could see Chantay, bright but failing school, tall for her age, big and pudgy, but still childish in face and act and thought. What could some grown man want with her sexually?


“They won’t come to Wayne Miner on weekends. They don’t set foot here from Friday ‘til Monday. They won’t help me. You got to come get me. Please.”


“Okay. Okay. I’ll get you out somehow. Move a chair in front of that door, as well as the burglar bar. Go into the bathroom and lock that door behind you, too. Then stay quiet as can be in there. Okay?”


“Okay. I’ll do that now, but you got to come get me.” She hung up the phone on that last plea that was as much a demand as an appeal.

(Yes, I'm reduced to this again. I was able to log on as my husband and comment for a while, but Blogger has apparently caught on and put an end to that in its unremitting hatred of me. *sigh*)

Mary, thank you! I'm so glad you enjoyed the story.

Paula, you're right. It's a wonderful cause and a fantastic anthology.

Debra, I believe real strongly in this cause. For example, PROTECT was instrumental in getting the "incest loophole" changed in the states where it was law. Yes, there were several large states where a predator could get out of going to jail if the child he molested was related to him!

Marilyn, I've often wondered about that. I don't think the man who helped me was necessarily an angel because everyone seemed frightened of him. I've never figured out exactly what happened there, and this story was part of my efforts to do just that.

Reine, it's a wonderful book, full of great stories. A great bargain. And Thomas Pluck deserves so much credit for putting it together!

Posted by Linda Rodriguez at 9:50 AM