I’ve had lots of opening nights.  Standing on stage behind the closed curtain you can hear the buzz of the audience.  The orchestra tunes up.  The energy is electric.  No matter how many rehearsals you’ve had or how well you know the show, there is a rush of nerves.  A burst of adrenaline.  Under the excitement there is always the worry that the show might not be ready for the audience – the press – the world.

Then the curtain goes up.  The orchestra plays and there is no time for doubts.  No time to worry about whether you’ll remember your lines, lyrics or dance steps.  The show starts and there is nothing to do but enjoy the ride. 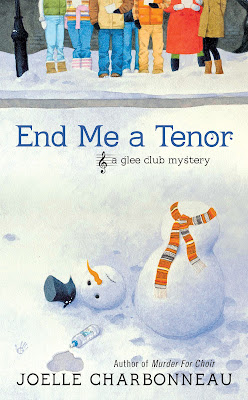 The curtain is going up a week from today on my fifth published novel – END ME A TENOR.  This is the second of the Glee club mysteries.  Paige wants to make it big in the opera world, but hasn’t yet snagged her big break.  Until now!  A big name tenor is headlining The Sing-A-Long Messiah and she has been cast as the soprano soloist.  This could be her chance to launch her career and officially end her tenure as the Prospect Glen Show Choir coach.  Only things don’t go exactly as planned and she is in danger of losing not only her big break, but her coaching job as well.

END ME A TENOR is perhaps my favorite of all the comedic mysteries I’ve written.  Because Paige spends part of the book in the world of professional performance, I found that I put a great deal of my own experiences from the stage on the page.  The excitement.  The nerves.  The hopes and worries that go along with knowing that you sometimes get one chance to make an impression on not only the reviewers, but your colleagues.  That perhaps despite all of the practice you aren’t good enough to make it in the business.

Sounds a lot like writing, too, right?  Because with every opening curtain in the publishing world, I feel those same emotions.  The curtain goes up next Tuesday.  I only hope that readers love Paige and the Music in Motion gang as much as I love writing them.

And maybe if I’m lucky, the curtain will be allowed to come up on this cast for many books to come.  Paige and I would be happy to perform for as long as readers let us.
Posted by The Stiletto Gang at 2:00 AM