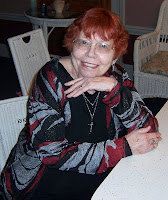 This photo was taken at my grandaughter's wedding. We all had such a great time. And she having so much fun writing on Facebook that she's going here and there with her husband.

Now it's time for me to buckle down to work. I'll soon have a new Rocky Bluff P.D. crime novel coming out called Angel Lost and I just received the cover for it last night and I love it.

As plans for her perfect wedding fill her mind, Officer Stacey Wilbur is sent out to trap a flasher, the new hire realizes Rocky Bluff P.D. is not the answer to his problems, Abel Navarro’s can’t concentrate on the job because of worry about his mother, Officer Gordon Butler has his usual upsets, the sudden appearance of an angel in the window of a furniture store captures everyone’s imagination and causes problems for RBPD, and then the worst possible happens—will Stacey and Doug’s wedding take place?

While I'm planning the promo for this book, I'm also writing a new Deputy Tempe Crabtree mystery and I'm on Chapter 6. Though I know where I'm going, more or less, it's been hard to concentrate with all the wedding excitement going on around me.

I'm also in the process of reading the Rocky Bluff P.D. novel that comes after Angel Lost to my critique group, chapter by chapter. The group is always my first editor.

The Rocky Bluff P.D. series is different in that it's always about the officers and their families as well as whatever crimes are going on the small beach community. A book may focus more on one character than another and new characters are introduced, but the main group of people who inhabit the Rocky Bluff P.D. and their families are always going to have their lives chronicled in one way or another.

Of course, because Angel Lost will be available in March, I must get busy with my promotion plans.

I do have a blog tour planned, and several in-person events, but there's always more to do, so I'm signing off and getting busy.
Posted by The Stiletto Gang at 2:09 AM