In 1994, I was a new mother with a new job at a new company. The Director of Marketing—someone with whom I would be working closely—was a stunning, blond, six-footer named Lauren Ward. I was immediately cowed. And then impressed. Within four weeks of meeting her, I learned that this is a woman who does not take “no” for an answer. Next thing I knew, I was disco dancing on a stage in a massive ballroom (by myself) in front of a group of about one hundred sales reps, imploring them to sell our product in a highly-competitive market. When I think back, I laugh about it. Let’s just say that my agreeing to dance for my supper, so to speak, is a testament to Lauren’s incredible ability to sell anything to anyone at any time. (I believe I wasn’t able to eat lunch until I had finished my presentation which also included singing.) Everything Lauren did was designed to benefit everyone, however, and that quality was what made me respect her even more.

We lost touch when I left the company, but through the grapevine, I heard that Lauren had had a baby and things hadn’t gone well. More to the point, the world had almost lost this force of nature to preeclampsia, a dire medical condition that affects pregnant women and that can be fatal for both mother and child. Lauren and I reconnected on Facebook after she came through her ordeal and I learned she was writing a book about it. Just this past Thanksgiving, I purchased a copy of Zuzu’s Petals, a remarkable story of her journey—one that fortunately for all of us, ends in a very happy place.

If you want to laugh, cry, be uplifted, and then rejoice, read this book. You can go to www.laurenwardlarsen.com to order it. Proceeds support blood donation, preeclampsia, water wells in Sudan, and There With Care. See? Everything Lauren does has far-reaching effects. Even her making me disco dance for my supper.

We are grateful to have guest blogger Lauren Ward Larsen join us today. And I am grateful to call her my friend. 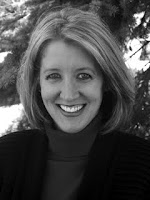 While reading the paper one morning, Manuel, a thirty-something Mexican immigrant, learns that there’s a local blood shortage. Having never donated blood before, Manuel decides to “help my fellow Americans.” Afterward, he describes the experience as “incredible,” and from that day forward, Manuel is a regular blood donor—every eight weeks.

A new mom goes into multiple organ failure and uncontrollable bleeding shortly after an emergency caesarean section is performed to save her baby’s life. Pints of blood are pumped into her body as fast as her veins can accept them. One of those pints is Manuel’s. Several weeks later, Manuel’s next blood donation appointment comes up and—again—the new mom receives his blood. She leaves the hospital after six weeks with a new mission: help recruit more volunteer blood donors so that others can be given the same second chance at life she was given.

In 2004, the new mom returns to the same hospital that had treated her and walks into a room filled with news cameras and people. Seated in the first two rows are twenty-two of her actual blood donors from years earlier. Among them is Manuel, who has a bouquet of flowers in his lap—a gift for the woman whose life he helped save. When he’s called to the podium to meet the recipient of his blood, he embraces her, then her husband, and then their daughter, now four years old.

Years pass and the recession hits, forcing many to foreclose on mortgages they can no longer afford. Among them is Manuel. The stress over losing his family’s home manifests itself as serious physical ailments, and he is hospitalized. His wife pleads with him to forget the home—the health of their family is more important than any material possession, houses included. He remains despondent, but there is one memory that pulls him through his darkest days: giving a hug to that little girl who has a mother—thanks to him. It takes months, but Manuel is able to overcome his health issues and move on with his life.

That Christmas, the new mom receives a card from Manuel announcing that he’ll soon be a grandfather. She sends baby gifts for him to pass along to his pregnant daughter, but when they arrive, Manuel sets them aside. “I’m saving the gifts for the baby shower,” he writes to her. “Before giving them to my daughter, I’d like to tell everyone how our two families are connected through blood donation.” The new mom reads this, and cries. Yes, she thinks, we are connected. Then she laughs as she pictures everyone at the baby shower all heading down to the local blood center together to give blood when the party ends.

Thinking back on this story, I am reminded of the scene from It’s a Wonderful Life—my all-time favorite movie—in which George Bailey begins to understand the depth of connection he had to so many people, and vice versa. “Strange, isn't it?” his guardian angel, Clarence, says to him. “Each man's life touches so many other lives. When he isn't around he leaves an awful hole, doesn’t he?”

This is a lesson I know well—ever since receiving more than 200 pints of blood ten years ago during the birth of my daughter, Clare. And I’ll forever be grateful that Manuel’s life touched mine.

Lauren Ward Larsen is the author of Zuzu’s Petals: A True Story of Second Chances (In The Telling Press, © 2011), which chronicles her experience with near-fatal preeclampsia and the unexpected life that unfolded as a result. She is also the president and chief ambassador of the Foundation for America’s Blood Centers, which supports independent blood centers that collect half the U.S. blood supply. Leaving the corporate world in 2000, Larsen became an international speaker, advocate, and fundraiser for preeclampsia research and education, volunteer blood donation, and clean water initiatives in Sudan.

For all of her grassroots efforts to promote blood donation, Larsen was awarded the 2001 Larry Frederick Award from America’s Blood Centers. She was also the recipient of 2006 Outstanding Achievement Award presented by AABB. And recently, Larsen was named one of the “100 Most Inspirational Alumni” in the 75-year history of the U.C.L.A. Anderson Graduate School of Management. She holds a B.A. from the University of Arizona, and an M.B.A. from U.C.L.A.

Larsen and her husband, Jeff, daughter Clare, and dogs, Gigham, Duke and Jack, live in Boulder, Colorado, where they laugh often and take nothing for granted.