Go to the Grocery Store 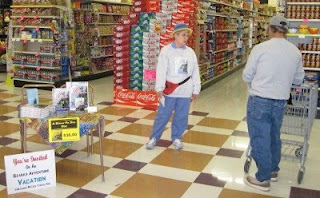 About eight months ago Ricky, the general manager of the store where the Nehrings buy groceries, asked me if I'd like to do a book signing in his store. (The store is part of an independent chain in my area–around 60 stores.) An author friend of mine, Gayle Wigglesworth, once talked about doing grocery store events in Houston, so the idea was already slumbering somewhere in the back of my thoughts. Therefore, when Ricky invited me to sign and shared information about how to set it up, I was ready.

Here is how it worked for me:

I made an appointment with the head of the chain's department in charge of non-food items. We met at his office, about 40 miles from our home. At that meeting he looked at the book I wanted to sell in his stores, decided it was a good product, and we discussed details. Eventually I signed a non-food vendor contract with the chain. Shoppers who got a signed book from me would put it in their cart along with the canned goods, produce, and whatever. My book would ring up along with everything else in their carts. At the end of a signing day I'd give the store an invoice for books sold, and they'd be in charge of sending my invoice to the home office. Not long after, a check for books sold, minus a small percentage for the chain, would be mailed to me.I was given a list of all stores in the chain. I could pick any store I wanted, and decide when I would sign there. A worker in the home office did advise me about which stores in areas I wasn't familiar with would most likely be a good market for books. (For example, if most customers spoke only Spanish in a particular store, I was told that.) The chain's General Merchandise Department would take care of notifying store staff when I would be there and see that the UPC code for the book was in their system. (That office also made posters for me to use in each store.)

A caution: I was invited to leave a few books in each store for impulse buys after I left, but found out this wasn't a good idea. Books can be damaged when people pick them up for a look. The GMD managers also move books around as displays change, and they aren't always careful how a book is treated during a move. It wasn't worth a few extra sales to risk damaged books, so now I only offer books on day-of-event.

I learn from the store's general merchandise manager where she (thus far it's always been "she,") wants me to set up. So far my locations have been just inside an entry door. I take in a card table and two chairs, put a colorful cover on my table, and set up books, posters, and various hand-outs. (Flyers, postcards, and bookmarks.)

I stand most of the time, offering a cheerful "Hello" to customers and giving out book cover post cards. Often I ask individuals if they like to read, or make some other book-related comment that seem appropriate. When they stop, the conversation continues, led by their questions or comments.

I picked Saturdays initially, but soon learned Friday afternoons can be better, especially in good outdoor weather or on days when the Arkansas Razorbacks have a game. (Football or basketball.) Saturday mornings are always better than afternoons.

All book sales are impulse buys since local media don't cover this type event. Day of event I put the chain-supplied posters on the doors of each store with poster tape, but few notice them. I wear either a t-shirt or a sweatshirt with the cover of the book being featured on the front, as well as my badge saying "Visiting Author." (People still don't always get it that I actually wrote the book on display.)

I smile a LOT. And yes, I am usually worn out at the end of a signing event lasting probably four or five hours.So, how do I feel about grocery store signings? I can choose signings to fit around other book or family events. The chain doesn't care when or where I sign as long as they know in time to notify stores I choose.

I can sign in or near areas where my novels are set, and in places where there are no bookstores.

Grocery customers are a huge cross-section of humanity in any area, much more varied than those seen in any bookstore or at advertised signings. If you want to learn how people in an area look, sound, and live, sign in a grocery store.

I am amazed at the number of men who shop alone and enjoy finding someone to talk to. After conversation, men do buy my books–mysteries with both a male and female protagonist that trend toward cozy. The number of men who buy has surprised me.(A larger percentage than in other venues.)

Older women shopping alone are good potential customers, and they like to talk. Again, I hear many stories–some that are incredibly sad. I have shared hugs and tears with a few of these women.

I have spoken with people who obviously love to read and want a book but then explain they are shopping with food stamps and those don't cover books. Others have stopped, looked, and then in various ways (showing me the $20.00 bill that had to cover their week's groceries, for example), explained why they can not buy a book.

Mothers with children in tow and smartly-dressed young women shopping alone are not good potential customers for me.

The opportunity to get a "real book signed by the author" catches many. The chance to buy a personalized book as a gift interests people as well.

I didn't meet many people who had ever been to a book signing in a bookstore or even knew such things happened. The idea of owning or giving an author-signed book was new to most.Other differences between these and traditional book signings?

The surprise element among those entering the store when they see my book table. The number of people who want a friendly chat. (Only once have I had questions from someone who wanted to publish a book, whereas in bookstores, that kind of contact is fairly frequent.)

If you want to make connections and learn about a wide cross-section of the public in your area, I recommend grocery store book signings! Note: Local chains or independents are usually best for signings. Many authors I know have had various difficulties in the big box stores, including one who got a bill for over $300 for "space rental." Ask questions before you sign up with anyone.

But yes, I recommend going to the grocery store!

Radine Trees Nehring began her writing career creating non-fiction feature articles and essays about the Ozarks for regional, national, and international publications. She spent ten years as a broadcast journalist, with her own weekly Ozarks news program, before she began the To Die For mystery series featuring Carrie McCrite, Henry King, and their families and friends in the Ozarks. The sixth Carrie and Henry novel, Journey to Die For, is an OWFI "Best Mystery" Novel and Falchion Award Winner. Radine has been published in China and Germany as well as the USA. She lives in Northwest Arkansas.

JOURNEY TO DIE FOR--print, Kindle, ebook
Silver Falchion winner, 2010
Posted by The Stiletto Gang at 5:00 AM