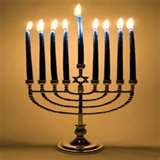 "Never underestimate the power of a few committed people to change the world. Indeed, it is the only thing that ever has.”

Margaret Mead might well have been talking about the Maccabees, the Jewish insurgents who led a revolt against King of Syria Antiochus IV, in the second century BC. It is this triumph of a small group of Jews against the Seleucid Empire that is celebrated at Chanukah, the Jewish festival which begins this week at sundown on Wednesday.

Thanks to Wikipedia, let me recount quickly why Jews light a menorah, play dreidl, and eat latkes.

Chanukah (and it's spelled a multitude of ways Hanukah, Hanukkah, and my preferred way of starts with a "c" and only has one "k"), marks the time when Jews regained control of Jerusalem and then rededicated the Temple after its desecration by Antiochus's forces. It was the equivalent of David slaying Goliath. But that wasn't the only miracle that Chanukah celebrates. When the Jews regained the Temple, there was just one vial of consecrated oil left to light the eternal flame in the Temple – and it takes eight days to make fresh holy oil. But the small amount which should have lasted one day, lasted eight. Therefore we light a candelabra known as a menorah that has room for eight candles and, one more a Shamash, an additional candle that is used to light the others. We light one additional candle each night so that by the eighth night the menorah is fully ablaze. We place the candles in the menorah from right to left because Hebrew is read that way (the opposite of how English is read).

Dreidl, a four-sided top with a hebrew letter on each side, is played to commemorate how Jews, forbidden to study Torah, used to meet secretly to learn. But if soldiers approached, the Jews would begin playing with tops, so that it looked like they were gambling, not studying. Each side of the dreidl has a Hebrew letter that together represents the statement, Nes Gadol Haya Sham, "A great miracle happened there".

During the holiday, we eat latkes and other fried foods (like donuts) to remember the miracle of the oil.

Gift giving is a tradition, not a religious dictate. Like many families, my husband and I have always tried to walk that tightrope of giving gifts to our kids without forgetting the real purpose of the holiday. It's an inspirational story that carries a message far beyond what happened all those many years ago. It's a reminder that each of us can make a difference.

As we light the first candle on Wednesday night, we'll draw strength from those who went before us who remained firm in their convictions, despite the overwhelming odds against them. We'll sing about the miracle of the oil and we'll rejoice in being together.

Below is my recipe for latkes – Enjoy!

Grate potatoes and then squeeze out all liquid.
Add grated onion, egg, flour, salt, and baking powder.
Drop by teaspoonfuls into hot oil. Fry on both sides then drain on paper towel.
Serve with applesauce. I also serve with sour cream.

Marian, the Northern Half of Evelyn David

Note to our readers:
Today is cyber Monday. Gift shopping has never been easier. You can order online The Sullivan Investigation Series or the Brianna Sullivan Mysteries. A good mystery is always a welcome present. Enjoy!